Today on the Doc On The Run Podcast, we’re talking about the best three ways to tell when to replace your running shoes.

Today, I was interviewed as a guest expert on a television program, and this is a health and fitness segment and one of the things I was talking about is how running shoes are really your only piece of injury protection equipment as an athlete.

The only thing between you and the ground is of course your running shoe and when you are running and you’re training and you beat up your shoes and use them just a little bit too long, they start to get pretty worn out. If you think about the way a bicycle helmet works is, it’s a very thin plastic outer shell with styrofoam between the shell and your head. If you get in a bicycle crash it basically crushes the styrofoam, the styrofoam absorbs the impact, but it gets destroyed in the process and then it cannot protect you again if you crash later.

Well, running shoes aren’t really like styrofoam, but there is some material in the midsole, in the running shoe itself that runs inside the midsole between the outsole and the inside of the shoe and that material is called EVA or Ethylene-vinyl acetate. An Ethylene-vinyl acetate absorbs impact, and is somewhat resilient. It just doesn’t get crushed like one and done like styrofoam, but it does get crushed and it can decompose over time.

There are a couple of different rules that people use to replace their running shoes.

The most common one is really mileage. So that’s number one, the first technique to use is just to keep track of your mileage. And if you keep a running log, you run with a GPS watch, or you’re following a specific training schedule you can see how many miles you’ve ran. And if you have run, let’s say 500 miles, you can safely assume you need to replace those running shoes. 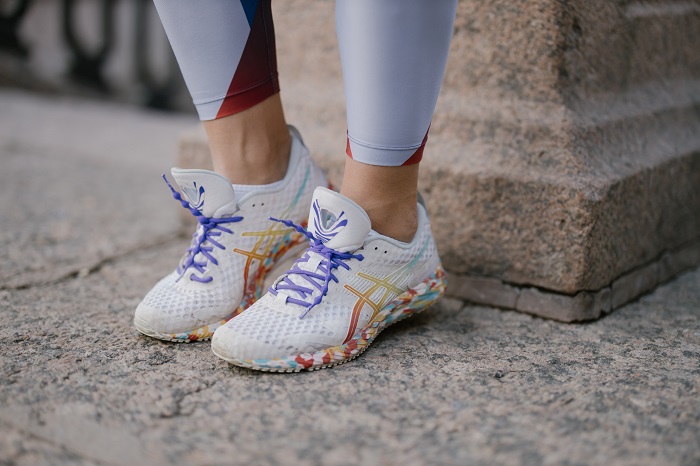 Now, there are some variables. I’m sure there’re going to be lots of comments that people will say, “Well, I only weigh 90 pounds, so I don’t beat up my shoes as much as somebody that weighs 200 pounds.” And that’s true. There’ll be probably people who say, “Well, I am a four-foot striker and I know I land without the high peak forces of somebody who is a heel striker, so my shoes probably last longer.” That’s also probably true, but you have to have some rule that you follow. And for sure, once you hit 500 miles, I think most shoes are cooked, regardless of whether you’re a four-foot striker, heel striker, a little bitty, lightweight runner, or somebody who’s bigger.

I’m six-two, so I weigh more than most runners and I pound on my shoes. So I think it’s better to replace them more like 200 or 250 miles. Now, that is really not a lot of mileage. If you’re training for a marathon and you’re running 50 miles a week, you’re only talking like a month or five weeks before you need to replace those shoes if you’re somebody who beats up on the shoes. Now still, even if you’re a lightweight four-foot runner, it could be two months, three months, and you need to replace those shoes again. But that’s one rule of thumb, is to go by mileage and just stick to a routine, replacing them.

Damage in the shoes

The second way is to actually look for damage in the shoes and when you look at the outsole and you look at the sidewall of the shoe along the side here, if you start getting wrinkles in there and they’re subtle and sometimes they’re not that easy to see, but if you push on the bottom of the sole and you push upward and you compress this material and you show wrinkles start revealing themselves along the sidewall, then that tells you that the EVA or the Ethylene-vinyl acetate cushioning material in the midsole is actually been damaged. And it’s not supporting you nor protecting you as it should. And at that point, if you see that wrinkling on the sidewall of the shoe, if you can tell that the midsole cushy material is damaged, then definitely you want to replace the shoes.

Compare to a brand new pair

The third way is a really great way, is to just compare them to a brand new pair. So, these are new running shoes, they’re fairly new anyway, and they don’t really have any damage and they feel like new running shoes to me. If I take the exact same pair, the exact same shoe, exact same model that I have when I bought two of them and take the ones that I have already retired, and I go run literally down the street in those, they feel totally different. They are completely beaten up. The EVA is crushed. They’re not absorbing impact as well. They’re not supporting me and protecting me and blocking unnecessary or excessive pronation. They are just not doing their job anymore.

And so that’s the third way, is to actually buy two pair at the same time. So if you like the shoes, this is the ASICS Gel Nimbus, I go through these a lot and I’ll often get two pairs at a time. And so then I’ll take one pair and run in that one pair until I think that they’re about done. And then when I think that they’re almost done, and I think maybe I’ve gone 250 miles or something, I’ll put on the other pair, it’s identical and then go for a short run immediately after wearing those others and they feel completely different. And if the shoes feel completely different, you know they’ve changed. That means you need to replace them.