#418 My foot x-ray was negative. Could it still be broken?

Today on the Doc on the Run podcast, we’re talking about whether or not your foot could still be broken if you got a negative x-ray.

Well, this question comes from Kate, who’s one of the podcast listeners who actually sent in a question. So Kate, sorry to hear about your injury, but thanks for sending in your question.

So she’s training for the High Lonesome 100 mile race, obviously she needs to maintain her fitness. And what she said is that, “I just kind of rolled my foot at my child’s field day. I heard a crunch and immediately saw swelling and discoloration on the lateral midfoot area of my left foot. An x-ray was negative. A week later, there is no change. I have not run, but it’s not healing. Could it be broken?”

Well, this is a great question and unfortunately the short answer is yes, it could still be broken. A negative x-ray just means that the doctor didn’t see anything, but that doesn’t mean everything.

So if you think about this, you roll your foot and you hear a crunch. Well, what is that crunch? Was there a walnut under your shoe? I kind of doubt it, but something crunched, something snapped, something broke, something happened to make that sound. And if you have that sort of crunching sound, that is typical of a fracture, that is typical of a bone breaking, and that doesn’t mean it’s going to show up on x-ray. You could also truthfully get a ligament tear or a tendon tear that makes a sort of crunching sound too, but most of the time it’s bone.

Now, when we take x-rays, bones usually show up pretty well, and so you think a fracture in the bone will also show up, but that’s not always the case. Sometimes you can get subtle fractures that just don’t show up because of the positioning. So if there’s a crack in the bone and you rotate the foot, then you can’t really see it. But on a certain view, you might be able to see it. So sometimes it’s positioning in the scanner, but it can be missed for lots of different reasons. 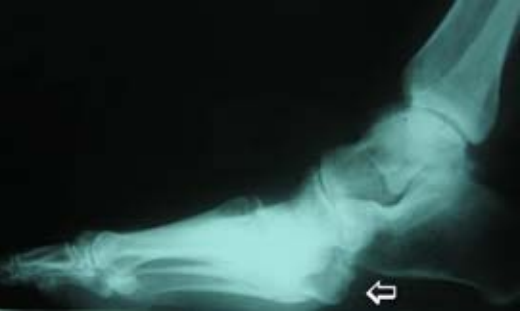 I’m going to share something with you here that’ll kind of show you what I mean. When you look at this here, this is actually a research project that I did when I was in residency and there was a thing called a Lisfranc fracture, or a tarsometatarsal fracture dislocation is the long-term, but basically what it is, is a very subtle fracture pattern. I did this research study because I saw a physician who missed one and this is the actual story with this injury, and I’m not making this up.

I was going into the emergency room, I was on a rotation in the emergency room, I knew about these, they’re supposed to be very, very rare. And I walked in and the doctor said, “Hey, this guy fell and his foot’s really swollen. You might want to look at him, but he’s off getting a head CT right now, because he slipped and fell in his kitchen. But his foot’s black and blue and his swollen.” Which again, sounds kind of like what Kate’s talking about here. And he said, “If you want to see his x-rays, well, you can check them out and they’re on the board over there.” And they were literally across the room in the emergency department. And I pointed at it and I said, “Hey, that guy has a Lisfranc fracture.” And he said, “Really, what do you mean?”

I walked him over and I showed him, and if you look at this, there’s an arrow on these images. And when I looked at it, I said, it was actually this one. And I said, “Well, there is actually a fracture where this ligament has torn off and ripped off a piece of bone. And then these other metatarsals are actually fractured as well.” And he didn’t actually see that. And he actually said, “Well, I only thought there was a fourth metatarsal fracture. I didn’t see the other stuff. And I didn’t realize it was a Lisfranc fracture.

This is the part you’re going to think I made up and I didn’t. I actually walked over to the computer to look at his orders on the computer, and there was an article in the Emergency Medicine Journal that this guy was reading. The article is actually entitled Tarsometatarsal Fracture Dislocations, a Frequently Missed Diagnosis in the Emergency Department. And so I took that case, and a number of other cases that were more subtle, and some that were worse, where, this other image here is where you can see that that foot has completely, the whole midtarsal joint has dislocated and collapsed it was so bad. But some of them are very subtle, where you just see an increased gap and if you look at it at exactly the right spot, on exactly the right view, you might see a tiny little chip of bone where that ligament has pulled away.

But one of the things from this that I found was that, it depends on who you see. For example, we did this fiscal analysis on all of these doctors that participated in this with all these cases, and podiatric physicians, podiatrists who are sports medicine specialists or surgical specialists were 80 times more likely, and orthopedic surgeons were 32 times more likely than family practice physicians or emergency room physicians, to actually recognize these things as fractures. So they are very, very easy to miss. And this is just the abstract that I presented at the medical conference that year, what was it, way back in 2005, and won this award from the American College of Foot and Ankle Surgeons, because it really pointed out and highlighted how difficult it can be to notice these fractures.

So what do you do? Well, there are several things you can do. If you have what you suspect is a fracture and it shows up negative, you have bruising, you have swelling, you have pain, you have heard a crunch or a snap or a pop or something like that, and feel like it’s not getting better, well then what I would usually do is try to get another study to verify that.

For example, if you have an avulsion fracture on the outside or lateral side of your foot, like Kate says, well, it could be a little crack or an avulsion fracture at the base of the fifth metatarsal, which is right where the Peroneus Brevis tendon attaches and tries to pull your foot back under you when you roll your foot. This is very common. You roll your foot, it goes over, it rolls and as it rolls over, it actually snaps and breaks off the base of the fifth metatarsal bone. And sometimes it’ll pull hard and crack it, but it doesn’t pull it away, so it’s very subtle, you can’t see it. But if you get an MRI or if you get a CT scan of the foot, it’ll usually show up.

With patients that have midfoot pain and it might be a Lisfranc fracture, sometimes just getting x-rays of both feet to compare, will show whether or not there’s a gap where you could have had this fracture. And if there’s a gap, then the doctor might be more likely to recognize it. But if you feel like you’ve got a fracture, and you’re really suspicious that you got a fracture, it’s probably a good idea to check it out with a more detailed study and this does happen a lot.

So again, Kate, thanks for sending in your question, hope you heal fast, hope it’s not broken and hope you do well at the High Lonesome 100.