Today on the Doc On The Run Podcast, we’re talking about the top five differences between normal patients with heel pain and runners.

This episode comes from a discussion I had at a medical conference last week, which was the International Foot and Ankle Foundation meeting in Sonoma, California. This was a medical lecture, medical conference, actually, where I was giving a medical lecture specifically on runner’s heel pain. The audience is all doctors, physicians, podiatrists, foot and ankle surgeons, sports medicine podiatrists, they’re all people who are getting their continuing medical education credits so that they can take better care of patients like you.

I was asked to give a couple of different lectures on running injuries. One of them specifically was about runner’s heel pain and the differences that I see in those who are actually just normal everyday patients, and those that are runners with heel pain. I do think there’s some big key differences. So this is a long talk that was about 40 minutes long, and I’m not going to go into all the details on that. But what I am going to do is share some of those key differences with you because there are a few that are really important and I think it’s helpful if you understand them if you are a runner.

With runners, the first big difference is that they give very specific information and lots of detail about the pain, the character of the pain, how it interferes with activity, all of these things. When I was explaining to the doctors is that I know a lot of doctors don’t like working with runners because, well, obviously you want to run and that makes the doctor’s job a little more difficult, but the advantage of a doctor working with a runner is that we know that you, as a runner, somebody who’s an athlete, who spend a lot of time training, a lot of time working on your running form, you have what I call greater somatic awareness. That just means that you can feel everything in your body and sort of pinpoint and put a label on those things when something is not feeling right, and certainly when it feels painful or uncomfortable. 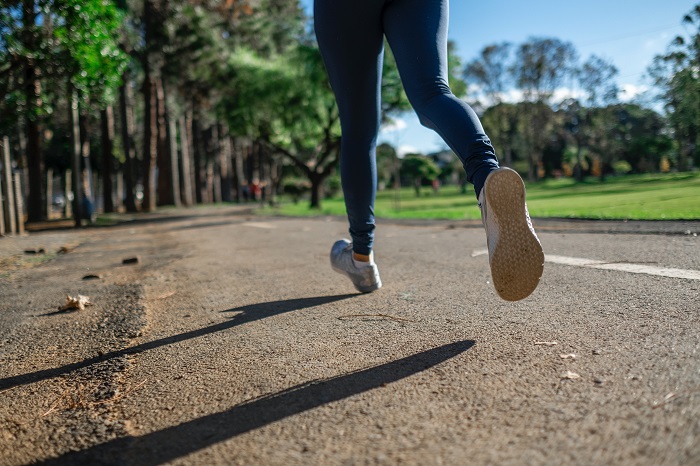 So I see lots of runners who have spreadsheets. They keep very close tabs on their pain, their discomfort, what runs they were doing, what shoes they were wearing and all of those. Well, one of those things can be very helpful to your physician. So if you’re going to see a doctor because you have runner’s heel pain, make sure you take that information with you and you share it with the doctor because they’re not likely to ask you about it or ask you if you have it and you don’t want it lost in the discussion.

The second big difference, and this one’s really important, is that the practice that I have, where I only do second opinion consultations for runners, for athletes, for people who want to get back to running, well, the patients I see are different. We know that in the United States, about 40% of all to podiatrists are for heel pain that is most often plantar fasciitis. So the normal patients most often actually do have plantar fasciitis. But what I see is that plantar fasciitis is actually a very, very small proportion of the runners that I see. In fact, plantar fasciitis is the least likely thing that I’m actually to encounter when I see a runner who has heel pain.

It’s usually something different, either a partial rupture or a neuritis issue or a bursitis issue, or maybe even a calcaneum stress fracture where you have a stress fracture in the heel bone. But when I take the total number of patients I have that call me for second opinion consultations, or whom I see person, well, that’s a minority of people, not the majority. That’s completely backwards from what doctors see who have a normal practice with a whole range of non-athletic patients.

So that’s one of the big things I was telling these doctors. They’ve got to pay attention because when a runner comes in, they should be on guard and really be thinking more about the possibility of a partial rupture of the plantar fascia instead of plantar fasciitis, and I was explaining to them that there are only a certain number of circumstances where I think it’s a good idea to inject runners for plantar fasciitis. But for most part, I rarely inject them. So I think that’s a big, important differentiator for you to understand and make sure your doctor understands when you go see them and you’re a runner with heel pain.

The last thing I’ll talk about is the fifth thing, the fifth big difference, is that when a patient who’s not a runner has plantar fasciitis, I think it’s really important to modify their activity and decrease stresses and strains applied to the plantar fascia to get it to calm down as quickly as possible, because we all agree that if you have chronic inflammation around the plantar fascia, or if you’re repeatedly stressing and straining the plantar fascia to the point it’s getting micro tearing, well, it’s just going to get worse over time and then you develop this thing called plantar fasciosis, which is actually degeneration of the collagen fibers in the plantar fascia. That is what predisposes you to a partial rupture.

We want to modify your activity as quickly as possible if you’re a non-runner. But if you’re a runner, the goal is to actually modify your activity as little as possible. Now, a lot of doctors start scratching their head when I talk about this, but if you think about it, if you’re not an athlete and you lose your fitness, how are you going to tell? You’re not going to tell. You’re not going to notice. If your form falls apart, you lose your running form and all the neuromuscular connections that make your running form good, well, you’re not going to notice, you’re not a runner. If you are a runner, there’s a much bigger price to pay for all of those things.

I think it’s very important to try to institute some strategies in the runner who has runner’s heel pain to try to decrease a little bit of the stress and strain to the fascia while you run, instead of just modifying the activities and eliminating running as an activity. That is a big key. So overall, I think it’s really important that you and your doctor understand that those runners who get heel pain, it’s really important that we modify your treatment plan, not just for the condition, but also for your specific running goals.

So task number one is to make sure that you write down your running goals and you take those and you have that written sheet with you. So you can go into the doctor and you can go in and say, “Okay, I’m here because I have heel pain, but heel pain is not the problem. The problem is that the heel pain is interfering with my running. It’s interfering with my training and it’s preventing from achieving these specific goals.” If you get your doctor to focus on the goal instead of the problem in your foot, you’ll have a lot better chance of getting rid of your heel pain and getting back to running as quickly as possible.