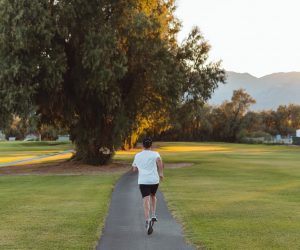 Today on the Doc On The Run Podcast we’re talking about the evidence or proof that you really don’t have to stop training when you’re a runner who gets a metatarsal stress response.

Is there any proof that you don’t have to stop training when you get a metatarsal stress response in your foot? Well, that’s what we’re talking about on today.

Now that is not always the case so today I thought maybe we could just talk a little bit about what proof there is that you really don’t need to stop running all the time when you get a metatarsal stress response.

So, first of all, a stress response is a normal physiologic response when you stress any tissue as a component of training. The goal is to stress it, get it, to react, rebuild in a way that makes it stronger and then you can do more after that. So that’s really what the basis of training is and you get some kind of tissue response. When you get a stress response in a bone, you get some inflammation within the bone that will show up on an MRI, but it’s not pathologic. 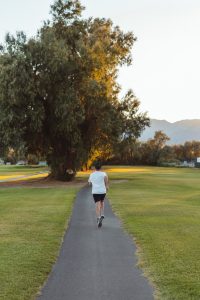 It’s not actually a problem. You have something that looks like a problem to a radiologist or a podiatrist or a sports medicine doctor, but it’s not always a problem. It’s a normal thing that’s going on as part of the normal physiologic process just like if you go out and you do hill repeats, your heart rate’s going to be super duper high. That’s not a problem. That’s a normal physiologic response. But if you were sitting in the doctor’s office, sitting in a chair and they checked your blood pressure and your blood pressure was really, really high and your heart rate was 185 beats per minute, they would assume something is really wrong with you. But when you’re exercising, that’s normal and after exercise, you have responses that are also normal.

So the first study to talk about, was just a couple of mentioned here, but the first one is in the American journal of sports medicine back in 2014 and the title of this study was bone marrow edema lesions in the professional runner. And in this study, they looked at some professional athletes and they noticed that a lot of athletes who are asymptomatic. Meaning they did not have pain. They didn’t have discomfort. They weren’t limping, they didn’t complain about anything, but on MRI, they had what we call bone marrow edema lesions, meaning something that looks abnormal on an MRI and more than half of those lesions or those abnormal findings where there’s this signal change or a difference in color, basically on the MRI, well that fluctuated throughout the running season.

What that means is that’s a normal thing. You ramp up your training and you pound on the tissue. It has to get stronger and what you see on the MRI is this inflammation within the bone that we refer to as bone marrow edema or suggestive of bone marrow edema. But again, it’s the normal thing.

Now what the authors of this study concluded is that when you see that and you’re a doctor, you should not immediately consider this to be a problem. It’s not related to what we call clinical complaints or the patient being worried about it and therefore it should not lead to an alteration of your training program. In effect, the doctors that did this study said, this is not something that leads you to change the runners routine. You don’t really have to do that.

If you have a little bit of pain from some particular injury, if you do a 50 mile trail race and you roll your ankle during the race, and you get an MRI a few days after, you’re probably going to have a doctor tell you that you have a bunch of different stress fractures, if not at least one stress fracture, even if that doesn’t hurt and you’re not complaining about that particular metatarsal bone.

So you have to take this with a grain of salt and you need to think about how bad it really is. You need to think about how much it hurts. You need to think about how much it hurts when you’re run. And if you’re not sure if you have a stress reaction, a stress response, or a stress fracture, you should probably go through the metatarsal stress fracture course for runners, where I go through them in more detail or check out some more of the episodes of the Doc On The Run podcast, where I talk about those things in detail so you can figure out, is it really a problem or not? Do you really need to reduce your mileage or not? And make sure that you talk about those differences and those subtle differences with your doctor when they’re telling you that you have to stop running.

The only way you can maintain your running fitness to get back to running as quickly as possible is if you take some specific steps to reduce the stress and strain to that injured piece of tissue and maintain the fitness and everything else. But if it’s just a stress response, that is a normal thing, just like your heart rate, being high when you’re doing hill repeats.

So make sure you know what the difference between those conditions are and then when you go to your doctor, you’ll be better armed to have a thorough discussion with them and figure out whether or not you really need to back off from running. That is how you get back to running as quickly as possible.

If you have a stress fracture, you’re probably really freaked out right now and think you’re going to lose all of your fitness while you heal. But it doesn’t have to be that way. I teach doctors how to help runners heal and maintain running fitness.

If your doc said “Stop Running!” You don’t have to stop running. You just have to reduce the stress to the injured bone so it can heal. You just have to be thoughtful about how you maintain your running fitness so you can keep healing.

Step-by-step guide to curing Stress fracture so it doesn’t come back!

If you have a stress fracture
You’re probably really freaked out right now and think you’re going to lose all of your fitness while you heal. But it doesn’t have to be that way. I teach doctors how to help runners heal and maintain running fitness.

If your doc said “Stop Running”
You don’t have to stop running. You just have to reduce the stress to the injured bone so it can heal. You just have to be thoughtful about how you maintain your running fitness so you can keep healing. 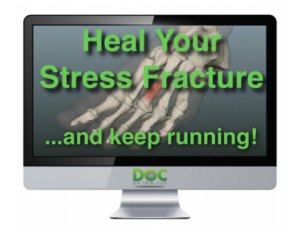