#382 What are bilateral bipartite sesamoid bones in a runner? - DOC

#382 What are bilateral bipartite sesamoid bones in a runner? 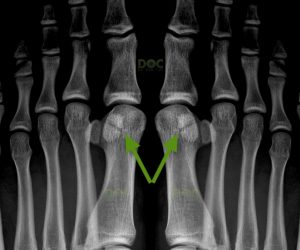 Today on the Doc on the Run podcast, we’re talking about bilateral bipartite sesamoid bones in a runner.

This episode comes from a question from one of the Doc on the Run YouTube channel viewers who wanted to know about “bilateral bipartite sesamoid bones” and what that really means.

I get these kind of questions all the time, when somebody really wants to know what a term means, what the implications are for them as a runner, if they’ve had an injury. And usually this is a thing like a sesamoid stress fracture or a condition like sesamoiditis where you start to get pain under the big toe joint and then you go to see a doctor, they look at you, they poke around on your foot, maybe they take some x-rays. And when they look at your x-rays, they tell you, “Oh, you have bilateral bipartite sesamoids.” And of course, if you’re not a doctor, you’re probably not going to understand what that means.

First of all, the sesamoid bones are these two little bones, they’re about the size of kidney beans, and they sit underneath the big toe joint at the ball of the foot. So when you get an x-ray of your foot, it’s actually really easy to see the sesamoid bones. You can see them, they’re kind of round or ovoid and they’re sitting under the metatarsal and you stand on them when you’re walking. So in terms of this question about bilateral bipartite sesamoids [inaudible 00:01:19], well, the first thing is, the sesamoid bone are those two little bones on your big toe joint. Now lateral, the term lateral in medicine means away from the midline. So when we say something is bilateral, that means it’s on both sides of the body or in this case, present in both of your feet. 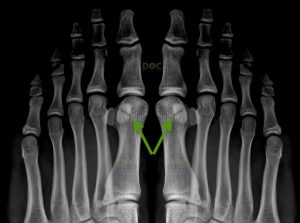 And so if you look at an x-ray and you have a bipartite sesamoid, let’s say one of the two sesamoid bones, which you have two of those, one of them is called the tibial sesamoid, the other is called the fibular sesamoid. And if your tibial sesamoid is a bipartite sesamoid, that means it’s in two separate pieces, and you’re probably wondering how that happens. Most people would think it broke in half, but that’s actually not the case when you have bipartite sesamoids because the sesamoid bones actually begin development. They’re soft when you’re developing as a fetus, and then all of your bones in fact are soft at some point, and they begin to develop calcium deposits and turn into ossified hard bone that you can see on an x-ray over time.

Doctors can actually tell the age of a small child by looking at the x-rays of the feet because we know certain bones completely solidify at certain ages. And within the sesamoid bone, since they’re two separate growth centers, they develop separately and they began to harden and fuse together to become this single solid sesamoid bone as you age and as you develop. And so sometimes that process doesn’t complete itself, and then effectively what you have is you have two little bones instead of one big sesamoid bone sitting there and it looks like it’s in two pieces and it’s connected by fibrous or cartilaginous soft tissue between the sections of bone so it functions as one bone, but it looks like it’s into pieces.

The question is, how can you tell the difference when you look at an x-ray of whether that’s a bipartite sesamoid or if it’s a sesamoid where you had a sesamoid stress fracture and it actually broke into two pieces and then separated? Well, there’s a couple of ways you can tell. The first thing is that when you look at them, there’s several things that we as doctors or radiologists looking at your x-rays would say, suggest one or the other. The first thing is that if you think about it, if you have a hard-boiled egg and you cut it in half, and you look at it, it’s obviously two distinct pieces. You have round edges away from each other and then in the middle, there’s a straight line where you’ve cut the egg in half, and the sesamoids do this.

When you get a stress fracture and it separates, it looks like you have two halves of one oval sitting there. But when you have bipartite sesamoids, it actually just looks like two smaller eggs sitting next to each other in alignment, but you don’t have this straight line. You don’t see a jagged line in between the two pieces of bone.

If it’s a fresh fracture where that jagged line is that’s between the two pieces, it’s generally a little fuzzy. It’s not clear. And when you have a clear edge of the bone on an x-ray that we see, we say that it’s corticated because the cortex is the wall of the bone and when it’s thick and hard, like the wall of a bone, it shows up on an x-ray. And so if we look at a bipartite sesamoid, you can actually look at it and trace all the way around the circle, all the way around the piece, a hard white delineated line that we call “cortication”.

And so that’s really it. So you’re looking for a two halves in the case of a sesamoid stress fracture or two pebbles or two beans sitting next to each other in the case of a bipartite sesamoid. Now, if you have it in both feet, then that certainly can happen where you have it in both feet. Sometimes people will have two bipartite sesamoids, one in each foot, but the fibular sesmoid is just in one piece. It starts to get confusing though when you’re trying to figure out whether or not you have sesmoid stress fracture when you’re looking at an x-ray and you have pain on the sesamoid, you have pain when you run, but you get an x-ray and then you’re confused because it looks like the bone’s in two pieces, but you’re not really sure because the doctor didn’t explain it to you.

Anytime you get an injury like this, it’s really important that you keep a track of all of your pain, that you make sure you’re tracking what you’re doing and that you can actually figure out what’s causing your symptoms so that you can get back on track.

So that’s one of the things I talk about in the Runners Rapid Recovery Journal. It’s one of the things I talk about extensively in the 3-Day Fast Track Challenge, which you can join for free, where I show you what it is to really figure out what your baseline is right now, what you can do to figure out if you’re doing too much or too little as you ramp up your training and maintain your fitness while you’re healing one of these injuries. But you can take all that information to your doctor and it can actually be very, very helpful for them to be able to make a decision about whether or not it’s something that you can continue to run or in some other way maintain all of your running fitness while you continue to heal.

If somebody tells you something like you have bilateral bipartite sesamoids and they don’t explain it for you, you need to stop them and tell them you don’t understand and make sure you get the full explanation. That will help more than anything else.