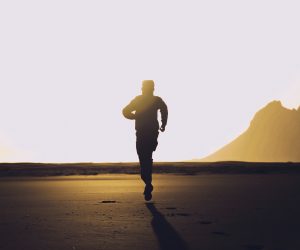 Today on the Doc On The Run Podcast we’re talking about the 3 forms of stress when you start running after injury.

In this episode, we’re talking about the three forms of stress that can affect you and the injured tissue when you actually get back to running after you’ve been injured and you feel like you’ve recovered.

There are really three things that you have to think about in terms of how much stress is being applied to the tissue. The reason this comes up is that I was just recently doing a telemedicine visit with someone and she had an injury. She was told to start running, but she wasn’t really given any specific instructions. She was told, “You can go and just kind of run a little bit and see how it feels.” Well, if you’re a runner and you haven’t been running for weeks because of an injury, you’re probably going to feel so good when you start running that you’re going to do too much, and it’s really easy to do. If you do too much, and then you start having pain, you’re going to completely freak out because you’re going to be worried that you’ve completely set back your injury.

Well, first of all, I’ll tell you that that’s rarely the case. What usually happens is you have a little bit of increased stress to the tissue. It does a little bit of damage that causes a little bit of pain, but because you almost have post-traumatic stress disorder from being immobilized, or using a fracture walking boot, or being on crutches and not running for weeks, you completely freak out and you think you’re going to have to start all over. First of all, that’s rarely the case, but it doesn’t really relieve your anxiety just to know that. 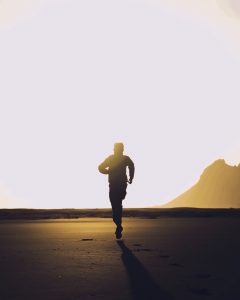 I think what can be really helpful is if you understand and think about the three different forms of stress that are actually applied to the injured tissue when you return to running. The way I think about this and the way I explain it to runners during telemedicine visits is that there are really three things that you can adjust or modify in different ways. There’s really three things: time, speed, and gravity. When you think about the forces that are applied to your lower extremities when you run, you have the amount of time that you run, that’s all additive. You have the speed at which you run, because the faster you run, the more you’re loading it and you’re more prone to actually having your form fall apart during those runs as you increase your speed. And then you have gravity. So you have the force of gravity and the way that you land.

I know I’m going to get all kinds of comments that say, “You can’t change gravity. It’s a mathematical equation,” and so on and so forth, but that’s not really true. What we’re talking about is the peak forces that are caused by landing. If you land as a heel striker, we know that you have a pattern that we can measure on a force graph that actually shows a very sharp peak where your heel hits and then a rounded peak where your forefoot comes down and the forces get translated over a longer period of time. These are things you can modify. There are ways you can modify all of these things as well.

In answer to this woman’s question, when she says, “Look, I’m trying to run. I just want to know, should I walk for a minute, run for a minute? Should I run for one minute, walk for five minutes? What’s safest?” none of that’s actually safest. And so I want to talk a little bit about these three forms of stress and how you can actually do something differently. If you think about this, when you’ve been injured and you haven’t been running for weeks, you’re weaker, you’re stiffer. You have this piece of injured tissue, but everything around it has atrophied and gotten weaker and more unstable. And so if you just go run, you’re actually at your highest risk of reinjury right then because your form is going to be terrible. Everything that supports that injured piece is also not really in good condition. So when you start running, those other structures aren’t able to support and protect that piece of tissue.

There’s another way you can go about this too. What I often have people do is to run either in a pool, or on an AlterG Treadmill, or using one of these different systems that reduces the force of gravity, and that’s a different episode, probably, to talk about each of them specifically. But if you think about this, if you go and run outside, you have 100% of gravity and that is the hardest to manage and the worst for you initially. So if instead what you do is you get on a treadmill that can modify the forces of gravity and you start out at 65% of gravity, this is very, very low gravitational force and it’s very low stress on the injured tissue.

If you get on the treadmill and you start running at 65% of gravity and you run for, let’s say, 20 minutes and you have no pain, well, then you know it’s safe for you to run at 65% of gravity for 20 minutes. You wait and see how you do. If you do really well and you don’t have any pain, then you can go back a couple of days later and maybe run at 65% of gravity for 30 minutes or 25 minutes. Just go a little bit longer. If that’s okay, a couple of days later, you do the same thing again. Once you increase the time, let’s say to an hour, if you want to run for an hour, you’re running at 65% of gravity. You’re running very, very slow, slower than your marathon pace, basically base level pace, and you’re gradually increasing the time at reduced gravity and reduced speed.

Now you’ve removed two of the variables initially, and while you’re working up to a longer period of time, you’re basically rebuilding your fitness. You’re starting to get your neuromuscular connections back. They’re going to help you have better running form. You’re getting aerobic fitness back, you’re getting muscular strength back, and that gentle loading of all of these structures with the lowest possible force makes all the injured structures start to rebuild better. Then what you do is you start increasing the time. So you go from base pace, to marathon pace, to half marathon pace, and you gradually inch up your speed to start building more of your form back in.

Now you’ve got your fitness back, you’ve got some strength back, you’ve got some neuromuscular connections back, you have better running form. Then you start adding in gravity. So you start ramping up the gravity slowly from 65%, to 70%, to 75%, 80%, 85% and so on. Then when you get to 95%, at that point, you’ve been running for an hour at a relatively fast speed and gradually returning the force of gravity in a way that strengthens everything very predictably. Then you can go run outside with a much lower risk of reinjury.

Well, that’s really the thing that you need to think about when you’re trying to modify these stresses as you’re getting back to running. Remember, if you have a huge setback, it costs you weeks of time. If you have a minor setback, it completely freaks you out. So you really have to try to modify those three forces in the way that serves you best so you can actually continue to strengthen all of those structures while that one injured piece of tissue continues to heal throughout that process. So make sure you’re thoughtful, make sure you consider these variables, and don’t just go out and go for a short, fast run. That is the worst possible thing you could do. Try to add some time. Try to add some time at slow speed. Then gradually ramp up your time, ramp up your speed, second, and ramp up gravity last. That’s the safest way to do it.