#364 What is traction neuritis? 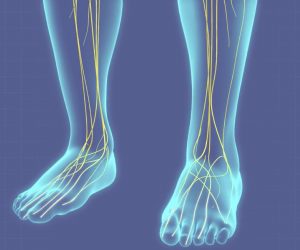 Today on the Doc On The Run Podcast we’re talking about traction neuritis in a runner and what it really means.

Well, traction means to pull on something. Your stretch it, Or in this case, you over-stretch it.

Neuritis is when you irritate a nerve. So, “-itis” means inflammation and “neural” is nerve tissue. So traction neuritis means you have inflammation or irritation of a nerve because you stretched it. And that can happen lots of different ways.

The most common way traction neuritis happens in runners is from an ankle sprain. And what happens is you’re running on a trail, or you’re running on some uneven surface, maybe a dog runs out in front of you and trips you or trips you, maybe you trip on one of your running buddies during the middle of a race, some other marathoner who is right next to you. It’s very easy to do.

And if you’re running on a trail or you’re running at all and you roll your ankle, the overwhelming majority of the time what happens is basically, you’re moving forward. So your foot starts plantar flexing or moving downward as you roll over it and it rolls to the outside. And so basically, you wind up pulling and stretching the top and outside of your foot. And you actually stretch one of the nerves on the top of your foot in the process. So the one nerve that happens to be just in the right position to get really stretched when you roll your ankle is called the superficial peroneal nerve, or the intermediate dorsal cutaneous nerve. That’s actually a branch of the superficial peroneal nerve. 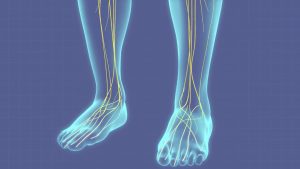 But on many runners, you can actually see it. It’s actually very easy to see on runners because many of us are so thin that we don’t have enough subcutaneous fat on the top of the foot to really hide that nerve. So a lot of times when people get that traction neuritis, when they’ve had an ankle sprain or they roll their ankle, or they trip when they’re running, they’ll have this weird sort of achy numbness or burning pain, tingling pain, shooting pain, on the top of the foot. Sometimes it shoots up the ankle and sometimes it shoots out toward the fourth toe, because if you look at the nerve on the top of the foot and you look at where it goes, it actually goes from the front of your ankle down right to the fourth toe.

And so in surgery, when we’re getting ready to do a procedure on somebody, we actually block the nerves, of course, so that you don’t feel anything during the surgery. And most of the time, what we do is we actually pull your foot in that same position that we would put it in when you sprain your ankle. We actually wipe it with an alcohol wipe and then that makes the skin a little bit easier to see it, the shadow of the nerve. And then we inject a tiny amount of local anesthetic right there, and that makes the nerve completely numb.

So it’s very easy to see, and you might even be able to see it on yourself if you look, and if you strum it like a guitar string, you’ll usually feel some kind of burning, tingling pain, something like that. And so when I see a patient who has what I think is traction neuritis, that’s usually what I do. I just push on the nerve, compress the nerve, strum the nerve, irritate the nerve and it reproduces their symptoms. Then we know you’ve got traction neuritis.