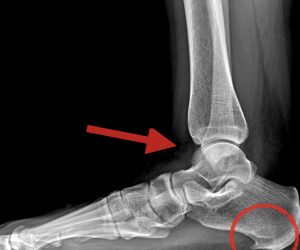 Today on the Doc on the Run podcast, we’re talking about osteophytosis in the foot and ankle in a runner.

Osteophytosis is a common finding on foot and ankle x-rays of runners. Bone spurs can form anywhere bone is irritated or otherwise aggravated by jamming, jarring motion. Most often, osteophytosis is found in the heel, big toe joint and ankle joint. The real is question is whether or not the osteophytosis a problem that needs to be removed, treated, or even prevented.

In this episode, we’re talking about osteophytosis and what does that mean. “Why did my doctor tell me that I had osteophytosis on my x-ray?” Or, maybe you got an x-ray report, you were looking at it, and it says something about osteophytosis. And that sounds kind of scary sometimes, but it’s not really a big deal. So, we’re going to talk about what that really means if you’re a runner and you have foot or ankle pain, and what the significance is.

There are lots of places you can get it, and it just depends on where you have it. Mechanical irritation of bone. Osteo refers to bone. And phytosis is really when we say you have osteophytosis, it’s where you actually have a bony overgrowth. And so the common term is a bone spur. If somebody says, “Well, I have a bone spur on my heel,” that’s osteophytosis. If somebody says, “I have a heel spur because I had plantar fasciitis,” then the radiology report may say something like calcaneal osteophytosis. And that means that you have this bone spur at the heel bone, which is called the calcaneus, which is why it’s calcaneal osteophytosis.

Interestingly, a lot of times, when you have that on the heel, it’s not really related to the plantar fascia at all. That’s one of the things I explained in detail in the Runner’s Heel Pain course. But if you have a spur on your heel, it doesn’t mean you have to have it surgically removed. It doesn’t mean you have to worry about it. It’s not poking you. It’s not going to hurt you. It’s not pointing up at the bottom of your heel, and it doesn’t matter in most cases. So, that’s the first thing, is that it doesn’t always mean something, but in some places, it does mean something. For example, I have osteophytosis in my big toe joints because I have a condition called hallux limitus, and that just means that the big toe really doesn’t move as freely as it’s supposed to. And so during certain activities like doing push-ups or elliptical trainers or lunges or something like that, you can actually jam the big toe joint. And when you do, it gets irritated because it compresses the cartilage, and then the bone underneath the cartilage starts to react.

Well, when you get irritation of the skin, your body does something about that. You start to get calluses. If you decided to start digging ditches for a living, in a couple of months, you’d have really thick calluses all over your hands from swinging a shovel all day. You get a similar reaction in the bone when you’re irritating a joint. If you’re getting joint pain and bone pain because you’re having excess motion in the joint that causes pain, your body reacts by trying to form additional spurs or bony blocking in order to prevent that painful motion in the joint. It’s a natural process, but then it starts to cause a problem because the spurs can get so big that they actually do block the motion and cause pain because it has a rigid stop when the big toe joint moves. 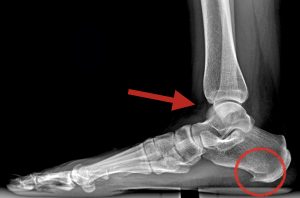 Another common place to get it is front of the ankle. If you had an x-ray report where you got an ankle x-ray because you had ankle pain and it said something like anterior distal tibial osteophytosis, that just means that at the end of the tibia, the distal part, meaning toward your foot, on the front which is anterior, the osteophytosis means you have some bone spur in there. And sometimes, but not always, you’re having impingement where when your foot comes up toward your shin, or when your foot’s on the ground and your knee moves forward and your foot is underneath you, obviously, you’re moving the tibia, the front of the tibia towards the foot, and the bone spur can actually bump into the neck of the talus and cause pain. And so if you have these two bones banging in each other, obviously, that can cause pain. But on an ankle x-ray, that’s a pretty common finding.

And if you get ankle pain because you have a bone spur, sometimes it has to be removed, but that’s not always the case. It’s not necessarily a bad thing, but it just indicates that you have some arthritis or wear and tear within the joint. But again, arthritis is not a death sentence. I do second opinions and telemedicine consults for runners all the time who really are freaked out because they have seen an x-ray report or they have been told by their doctor that they have osteophytosis. And they think that they’re doomed because they have arthritis in the big toe joint or some mild arthritis in the ankle. And it’s just not true.

I have it in my big toe joints. I still run a lot. I’ve done lots of marathons, Ironmans, ultra marathons, all that stuff. I still run all the time. I run daily, and it’s not a problem. It’s a problem if you mess with it. It’s a problem if you do the wrong things. If you aggravate the bones probably bumping into it, that’s obviously going to cause problems. But if you modify your activities and your exercises just a little bit, and you wear the right footwear to prevent that motion, then it’s not so much of an issue. So don’t let osteophytosis freak you out just because some doctors said they found it on your x-rays. And that is really most of what you need to know about osteophytosis if you’re a runner.