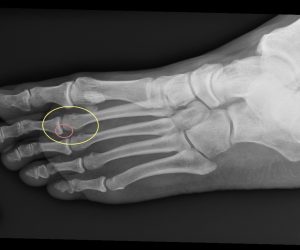 Today on the Doc On The Run Podcast we’re talking about whether or not x-rays can show a plantar plate injury.

I was just doing a telemedicine visit with a runner who has had an injury to the plantar plate ligament and he’s had pain for months. He’s been getting better slowly, but he was trying to figure out how bad it really is. And one of his first questions he asked me was what I see on the x-rays.

I said, “Well, I’m looking at the x-rays of your foot right now that you sent to me and I can show them to you, but there’s really nothing on your x-rays.”

He said, “What do you mean? There’s nothing. Can you see anything about the plantar plate where it’s torn, where it’s injured or anything else?”

And the unfortunate reality is, is the answer is, “no.”

He said, “Well then why did my doctor get x-rays of my foot? And why did I have to pay for x-rays if it doesn’t really show up on the x-rays?”

So, what can you see on an x-ray? Well, this is a good question.

What we see on an x-ray, the only one thing that truly indicates that you probably have a tear or rupture of the plantar plate ligament is that you have what we call superior migration of the proximal phalanx, and what does that mean?

What it means is that when you look at the joint and it’s in proper alignment, you have the toe sitting at the metatarsal phalangeal joint, where the toe attaches to the foot at the ball of the foot.

When you look on the x-ray and you look at it from the side view, what you’re seeing is you have the head of the metatarsal bone, the long bone that goes from your mid foot, all the way out to the ball of the foot. And then you have the proximal phalanx that sits in position aligned with that bone.

And so when they’re both in alignment, the two bones surfaces that are covered with cartilage are actually curved and they’re in perfect alignment. But when you have the ligament that stabilizes the joint on the bottom of the foot, where the toe attaches, that ligament connects the bottom of the joint capsule, the metatarsal bone and the proximal phalanx bones together. And when you tear that ligament and you completely rupture it, what happens is the toes starts to drift upward.

Now it doesn’t just bend upward at the ball of the foot, it actually drifts straight upward. So when it does that and we look at the x-ray from a side view, what you see is that it has, we say migrated, which is a fancy word for it moved and it moves upwards. So when you have upward migration or dorsal migration, which means up away from the ground toward the top of the foot, that dorsal migration and the change in position of the toe, and specifically the bone in the base of the toe called the proximal phalanx bone.

Well, when that bone gets out of alignment and drifts upward, the only way it can do that is if the plantar plate ligament is not doing its job, holding the toe down against the ground and in the right position. So that’s the first thing. This superior migration of the proximal phalanx bone is the only thing you can see on an x-ray that clearly indicates you have significant injury, meaning like a complete rupture of the plantar plate ligament at the ball of the foot.

Now, of course, most people can tell whether or not that is the case without an x-ray. I can look at a foot and you can look at your foot and if you have a complete rupture of the plantar plate, just by doing some of the tests that I show you how to do in the Plantar Plate Course for runners.

Well, you can tell that by yourself. That is not a difficult test, but obviously if your toe is easily manipulated and pulled out of position when you do some of those tests, I show you how to do in the course. Well, then you know that you have a complete rupture of the plantar plate ligament and you don’t really need x-rays to show that. So then, of course, that begs the question. Why would a doctor get an x-ray when you don’t really need it? 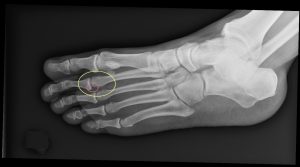 Now, the first thing is that doctors, often knowing that there can be lots of different conditions that can cause that kind of pain in the ball of the foot, like a metatarsal stress fracture, or damage in the joint arthritis, or a thing called osteochondritis, which all kind of hurts in the same area.

Those things show up more readily on x-rays and so the doctor may get x-rays just to rule out or prove that you don’t have those other things. So it’s kind of a process of elimination.

The other thing is that sometimes when you get an injury to the plantar plate ligament, the toe will deviate, meaning that it will drift from one side to the other. Usually it’s medial deviation, meaning that the second toe drifts and changes position, so that it’s closer to the big toe than the corresponding toe on your other foot. That’s part of the reason we always compare your feet when we’re looking at you and trying to figure out is the toe deviated. Do you have swelling, all that kind of stuff.

So fortunately you have two feet, you compare one to the other and the non-injured side, if it’s the toes in the same kind of alignment, then we know that it’s probably normal. But on an x-ray, you can see that medial deviation where gets out of alignment.

And that also implies damage potentially to the plantar plate ligament, the joint capsule, and maybe some of the other joint supporting structures. The other thing is that when we look at the x-rays, what the doctor is looking for specifically in cases of plantar plate ligament injuries is specifically this thing that we call an abnormal metatarsal protrusion distance, or you may see it abbreviated as MPD for metatarsal protrusion distance.

What that really means is that we’re looking to see how long your second metatarsal bone is. What does that mean? Well, when we look at your foot on an x-ray and we look at this one particular view where the x-rays are shot straight down from straight up above with your foot flat on the floor, that’s the AP view or anteroposterior view. And when we look at the AP view and we look straight down on your foot, if we take a line and we bisect your second metatarsal bone, we basically divided in half by putting a line on the x-ray.

Well, then we know since the bone tilts toward the ground. The longer it is, the more pressure there is under that bone where it hits the ground. And what’s there? Of course, the plantar plate, it’s on the bottom of that joint. So the longer your second metatarsal, theoretically the more pressure there is and the more risk of injuring the plantar plate. So when you get an x-ray, a lot of times, you’ll see the doctor draw lines on the x-ray right in front of you to check and see how long your second metatarsal is. And if it’s very long, that is not a sign of an injury to the plantar plate ligament, but it is a sign that you’re more at risk of getting an injury to the plantar plate ligament. And that’s one of the things your doctor may comment on. So those are really the things we’re looking at when we look at x-rays of your foot.

And you’ve been running, you’ve had pain, you’ve got pain in the ball of the foot. It doesn’t seem to be getting better. It’s just this nagging injury that won’t go away. It really is trying to figure out whether or not you have anything on the x-ray that might show up that indicates something else or if there things that might lead your doctor, more likely to believe that you have an injury to the plantar plate ligament that’s causing your pain.

All of those things are outlined in the Plantar Plate Course for runners in some of the other lessons. But it’s more valuable most of the time to actually do what we call a clinical exam, where we look at you or where you look at yourself with a little direction, seeing exactly how we would do it to help figure out whether or not that really is what’s causing your discomfort. Because if you treat it like something else, if you treat it like a neuroma or you treat it like another condition like osteochondritis, it’s not going to get better.

It’s a different problem, it needs a different solution. And the best way to get back to running as quickly as possible is to make sure that you have the right treatment for the right problem, then you get back on track.

You may find this hard to believe, but most of the runners who call me for a second opinion when they have a planter plate sprain and they’re just not getting better, and they’re frustrated because they’re losing all their fitness and it seems like it’s taken forever to get better. I hate to tell you this, but most of the time, what I do is I explain to them the exact same stuff that is in the Plantar Plate Sprain Course, or you can go to this episode at docontherun.com and you can get access to it. You can go to the tab that says, self-help courses.

You can go there, but you can get access and you can get the information that’s going to be most helpful. So I spend a lot of time putting that course together just to make sure you know exactly what to do. And what I show you in that course is exactly what I would do with you if I was sitting in your living room right now.

Just go to docontherun.com, click on the podcast tab, go to this episode or go to the self-help courses and get it now.

Remember, it’s not really that complicated. When you have a plantar plate sprain and you want to get back to running, you need to confirm you have the right diagnosis.

You need to decrease some stress and strain to the plantar plate ligament, decrease the inflammation around the joint and then follow a very structured return to running that will allow you to retain your aerobic fitness, rebuild your running fitness and prevent you from getting another overtraining injury.

But if you do that, you can heal the plantar plate ligament and keep running!