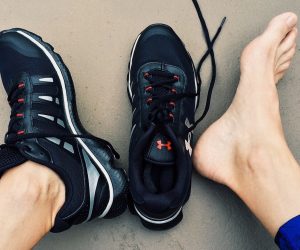 Today on the Doc On The Run Podcast, we’re talking about 3 Neuroma treatment considerations for minimalist runners.

I just got off a telemedicine call from a guy who’s out of town. He’s in Southern California, whereas I’m in the San Francisco area, and he had a question about neuroma treatment for somebody who likes to use minimalist shoes. And he had a really good question.

He said he went and saw a doctor and that he was a little concerned about the treatment options that were given to him. And so I thought it might be worth talking about some of the three main concerns that you should have in the way you should think about treatments when you have a neuroma and you’re concerned about the treatments you get offered, particularly if you’re somebody who likes to run, and in particular, if you like to run in minimalist footwear, like minimalist running shoes or running barefoot, or if you’d like to run with minimalist running form.

So the first thing we talked about with this guy during this call was that you have custom orthotics, which is one of the first line treatments that’s ever recommended for people who get a neuroma. And the way custom orthotics work is they actually are a custom insert that’s molded to your foot to hold your foot in a corrected position and take some of the pressure and forces away from certain structures that are getting irritated, like the nerve in your foot that causes something called a Morton’s neuroma.

But custom orthotics are not made just for people that have neuromas. They’re made for runners with all kinds of different problems, but they’re not always necessary. And so the first consideration, when you like to run in minimalist shoes and you have a neuroma and you’re trying to get it better is when somebody recommends custom orthotics to you, you have to realize that custom orthotic inserts actually work best in normal running shoes. 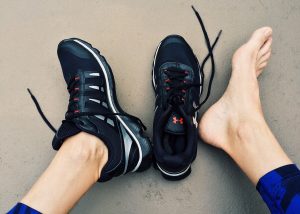 A custom orthotic has a deep, rigid heel cup and material that supports your arch, but holds your heel bone in a certain position. And that relies upon the outside of the shoe or the structure of the shoe basically holding your foot in that corrected position. And so when you run in minimalist shoes, the orthotics are going to definitely feel weird and they are definitely going to function a little bit differently than if they were in really normal shoes that have more external support.

So when somebody tells me that they’re a minimalist runner and a doctor recommended custom orthotics, it’s not that that’s the wrong recommendation, it’s just one that is going to feel seriously different and very strange to anyone who likes to run with minimalist form in minimalist running shoes. And I don’t think that most runners are going to enjoy that sensation and that amount of control when you’re used to running with more natural running form.

But then the second concern is when you get a little bit worse, a little bit longer down that continuum, when you’ve had a neuroma that doesn’t seem to be responding to normal therapy is the idea of surgical intervention to remove the nerve. I’ve been lecturing about this and doing lots of different podcast episodes for a long period of time, talking about my opposition to this relatively common surgery.

And when you have a neuroma that does not get better, a Morton’s neuroma in the foot that continues to get inflamed and becomes painful and you start having burning pain, radiating pain, pain that just doesn’t go away. Well, one of the common treatments is to remove the nerve. Now this is the only place in the human body where we as physicians and surgeons will generally recommend a surgical removal of a nerve as a normal course of treatment. There’s nowhere else where that we do that as a relatively first-line treatment. And what we tell you is that you’re basically going to have numbness in this small area between your second and third toe where you’ll have some numbness, but you won’t have any more pain. And so that seems to be worth it.

But the thing you have to realize is that most people who do the surgery, in fact, the way that I did the surgery on every person I ever did it was that we make an incision on the top of the foot. We dissect down to where we get to the nerve. To get to the nerve, it is underneath a structure called the intermetatarsal ligament. Now the intermetatarsal ligament actually connects all the metatarsal bones together. And those are the bones that you feel in the ball of your foot that you stand up on.

So most people, frankly, who aren’t runners, who aren’t minimalist runners, who aren’t athletic, they’ll never ever know. But you, as someone who runs a minimal issues, you actually might notice that, and it might feel weird to you, and it could potentially even put you at higher risk of developing other problems later, like metatarsal stress fractures, or some other issues. So that’s one of the reasons that I don’t really recommend surgery, unless it’s an extreme case for somebody that has a neuroma when they’re a runner. And that brings us to the third consideration, which is conservative therapy for a neuroma when you are a runner.

And you have to realize that this has very few drawbacks. And so I don’t think most runners should want to jump to a drastic treatment and they should try what we call conservative therapy or non-surgical therapy whenever possible. I, myself actually had a neuroma when I was in residency, in my surgical residency.

I was walking around all day during the day, and then standing in the operating room and doing rounds and stuff in the evening and at night and early in the morning. And so I spent a lot of time on my feet and I got a neuroma and I did not have surgery. I did not even inject it. All I did was use some modified pads to take some of the pressure off of that area. And then it improved. It improved after only a few weeks, I was actually training for a marathon and I did not have any problems.

I ran the marathon. I continued to run and I’ve not had any neuromas since that time. So you can treat neuromas conservatively and the shorter period of time you have had neuroma pain, generally speaking, the more likely it is that you will quickly get rid of the discomfort and get it to calm down if you can do some simple things to actually get it on track. But again, if you remove the nerve, the idea of conservative therapy has already gone.

You can’t do the things that might work conservatively after you have surgery.

So that’s the third consideration is that you really have to think about what you can do right now to reduce the inflammation, reduce the stress, reduce the mechanical irritation of the nerve to let it start to calm down and actually change direction and move in the right direction and start to improve instead of getting worse.

If you’re a runner and you like to run in minimalist shoes, I think it’s really important to try that approach first and not jump to these more drastic treatments. Make sure that you figure out what you need to do. Much of the stuff that I have on that is in the Ball of Foot Pain course that teaches you how to tell the difference between a neuroma or a plantar plate sprain. But I do these kind of conference consultation calls all the time for athletes who have exactly these kinds of questions, where they want to know, where am I along that continuum? How bad is it? What should I do? What should I do to reduce the inflammation? What kind of modification should I do to the pads that I put in my shoes?

Hey, listen, thanks for listening to the episode. Hopefully you found this helpful. If you did find it helpful, just do a favor for me, please rate and review the podcast on iTunes, or just take a screenshot of it and share it with one of your runner friends.

Sign up for the Ball Of Foot Pain Course For Runners so you can get back to running. 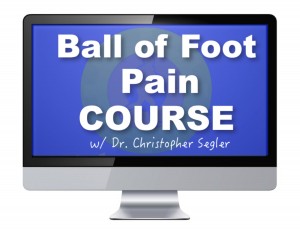 Sign up for the Ball of Foot Pain Course for Runners HERE!