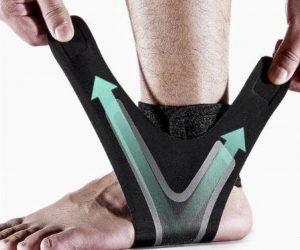 Today on the Doc on the Run Podcast, we’re talking about whether or not a runner can use an ankle brace instead of an aircast, when recovering after an ankle fracture.

I got an interesting question sent in from a runner, who said, “I fractured my left ankle, it was a non-displaced obliquely oriented fracture of the lateral malleolus. I have been in an Aircast ever since and I’m been getting an x-ray every two weeks to make sure it’s healing in place. I’ve been in the Aircast and I’ve been walking since day five and I’ve had next to no swelling and I have no pain now at all. So, should I continue with the Aircast for another three weeks or try out an ankle brace? Healing has been miraculously, but obviously I don’t want to overdo it but I’m very eager to get back into running”. This is a great question.

But the interesting thing here is what’s behind this question really is, obviously this is somebody who’s under the care of a doctor. He’d been seeing a doctor, a doctor’s been doing x-rays every two weeks and clearly it sounds like the recommendation from the doctor who’s actually providing the care, he said you need to stay in the fracture walking boot. And so I’m not sure exactly where this question comes from, but it’s certainly possible that this is somebody who has listened to one of the podcast where I talk about the detrimental effects of fracture walking boots when used too long in runners after simple non-displaced fractures of the foot or the ankle.

As a basic idea, I can say that you never, ever want to go against the doctor’s advice. So the idea here is that obviously, if you hired me as your doctor, you would think that I’m going to do the right thing for you. Obviously we’d have some level of trust. You believe that I know what I’m talking about and I’m going to give you good advice. That’s true of every doctor.

Nobody hires a doctor without believing the doctor is on your team. You would never get a coach and think the coach is going to do something to make a mistake and not help you achieve your goals. But this is a valid question, can you use an ankle brace earlier and get out of the fracture walking boot? The simple fact is you can do anything you want, but you just have to be prepared to pay the consequences. 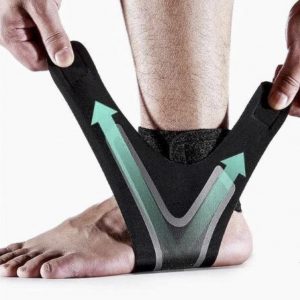 So the question isn’t, can I use an ankle brace instead of the fracture walking boot?

The question is, what will happen if I do this?

What will happen if I switch from the fracture walking boot or the Aircast right now, to just a simple ankle brace.

And this is really the question for your doctor.

And so you want to ask your doctor, why do I have to do this? Why I can’t, I do that? Why do I have to use an Aircast for another couple of weeks until we get another x-ray? Why can’t I move to an ankle brace right now? So you want to really make sure that you have a doctor who you can ask those kinds of questions and obviously I haven’t looked at any of these x-rays. I can’t make a judgment call on that, on whether it’s actually safe to move from the fracture walking boot to the ankle, but there’s a way to assess that and any doctor can assess that.

It’s not just me. Any doctor can do that, so you just have to be able to have a conversation with your doctor and where they’re looking at your x-rays or an MRI or anything else. You need to take all of that information that the doctor’s giving you and the doctor’s basic plan that they use as a base level plan for everybody and then you want to ask them more specific questions to see if it’s reasonable for you to do that or not. Obviously I can’t tell you to do something when your doctor has clearly advised against it because that would basically just be simply irresponsible because I don’t know the whole story. All I know is that somebody who wants to get back to running and I certainly understand that. I think we all as runners want to get back to running as quickly as possible.

The way to do that is to make sure that you’re advancing your activity level as quickly as possible so that as the ankle gets stronger, as the bone heals at every stage, that it’s a bit stronger, you’re able to do a little more motion. That’s where you have to pin your doctor down. You don’t want to just ignore your doctor’s advice based on something you’ve read on the internet or a podcast episode that you listened to while you’re sitting on the couch recovering.

But it is fair to ask your doctor specifically, if it seems like it’s more stable now than it was two weeks ago, isn’t there something else I can do now? Some more activity I can do now, something I can do to get range of motion back now, without disrupting the healing. That’s really what you have to do, so you just have to pin him down with specific questions that you know are going to help you move incrementally from where you have been two weeks ago, to where you get a new x-ray and it shows it’s improved some. Well, then you want to move to the next stage of activity.

Those are the questions you really have to ask your doctor, if you really want to get back to running as quickly as possible.

There are several question you need to ask if you think you have a fracture and want to get back to running as quickly as possible. I’ll walk you through them.