#246 What makes a stress fracture high risk for a runner? - DOC

#246 What makes a stress fracture high risk for a runner? 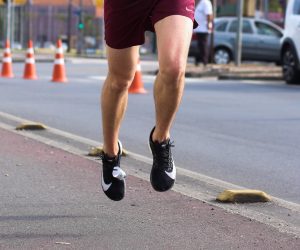 Today on the Doc On The Run podcast, we’re talking about what makes a stress fracture high risk for a runner.

Now, most doctors, when they think about stress fractures and risk, really think about two primary considerations. The first one is the propensity for the bone to actually heal without trouble.

If you have really good blood flow in a bone, then we usually consider it low risk. For example, the heel bone or the calcaneus is one of those bones that we know has really, really good blood flow. As such, it actually heals very quickly when it develops a stress fracture or even a traumatic fracture if you fall off a ladder or something like that. So because it can heal very quickly, most doctors think of calcaneal stress fractures as being low risk.

Now, some bones actually have really poor blood flow. For example, the fifth metatarsal bone, which is on the outside of your foot, the one that goes to your little toe on the outside of your foot. That bone we know at the base of the bone where the shaft turns into the bulky part of the bone at what we call the metaphyseal-diaphyseal junction, right where that transition happens where the bone flares out toward the base. Well, that particular area of that particular metatarsal bone has relatively poor blood flow. That’s where you develop this thing called a Jones fracture.

Jones fractures are notoriously hard to heal just because that area of the fifth metatarsal bone, it has very, very poor blood flow. So if you get a Jones fracture, we know that they have a high risk of going on to developing a nonunion where the bone doesn’t really heal.

Now also, you have bones that we know absorb a lot of force or are extremely difficult to fix if they actually break. The navicular bone or the two little bones underneath your big toe joint, those are bones that can develop stress fractures that we think of as high risk actually for two reasons.

The sesamoid bones don’t really have great blood flow. If you fracture them, the way the blood flow comes into the bones can actually disrupt the blood flow and make it extremely difficult to heal. And because they’re two little bones about the size of kidney beans, when you walk on them, we put a lot of force through them and it can be very, very difficult to fix them if they break. So oftentimes when they break, we have to take them out or just remove them. And you really don’t want to remove a bone if you’re a runner, obviously.

So the bones that we think of as being high risk with stress fractures are the anterior tibial diaphysis, or the front of the leg, right at the crest of your shinbones. If you feel in the middle of your your shin, there’s a ridge right in the middle of that bone. If you have a stress fracture in that area of your tibia, that’s considered high risk. The base of the fifth metatarsal bone, or the bone on the outside of your foot, that can be high risk.

A medial distal tibial angle fracture right where that bump on the inside of your ankle bone is, well, that is the end of your tibia. If you develop a stress fracture there, that can actually crack and turn into an ankle fracture.

The navicular bone right at the top of your arch is also very high risk because if it breaks, it is a huge problem. If it breaks, it can disrupt the blood flow in a similar way that the sesamoid bones can. The sesamoids of course are also high risk.

Now, most doctors in published classification schemes will say that the calcaneus or heel bone is low risk. But I actually consider it high risk because I think if you hear that it’s low risk and you have a calcaneal stress fracture and you keep running on it, you may actually break it. The heel bone is basically like a hard boiled egg. It’s a thin shell with a soft center. When you crack it, it kind of blows apart like an egg dropped on the sidewalk. So for that reason I think that it’s actually really kind of high risk.

If you have pain in your fifth metatarsal on the outside of your foot, in the middle of the foot, that also is very high risk because that could turn into a Jones fracture. If you have ankle pain and you’ve been told you have a tibial stress fracture, that’s very high risk. I

But the other ones that are low risk are if you have posteromedial tibial stress fracture, that kind of feels like a shin splints, then that is really not that bad and really much lower risk than an anterior shin stress fracture. The metatarsal shafts, meaning two, three, four, and even five if it’s further out toward the toes, those are all low risk. The fibular stress fractures are very low risk because it’s a non-weight bearing bone.

So you need to figure out what your goals are. Do you really have a race that you want to do right away or do you really want to keep running forever?

Those are really important considerations when you have a stress fracture. So you’ve got to figure out your goals.

The most helpful tool to do that is the Injured Runner’s Goal Worksheet. It’s on the website under this episode. Just go get it, print it out, fill it out, and it’ll really help you figure out what you need to do to get back to running as quickly as possible.

One simple step you can take is start with the Healing Runner’s Goal Worksheet.

It will help you take what you know about goal setting in running and use what you already know to focus your healing. It’s free.

Go get it now!