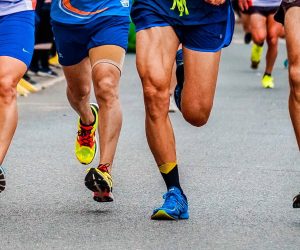 Today on the Doc On the Run Podcast, we’re talking about how a runner can get from wearing conventional running shoes with custom orthotic inserts to running without orthotics in minimalist running shoes.

Whenever you run with custom orthotics you get external support that stabilizes and supports your foot. If you run in conventional running shoes that have some additional support, you are theoretically even better protected from the forces of running, at least from a biomechanical standpoint.

The polar opposite of that biomechanical spectrum is running in minimalist running shoes which have little to no structural support.

Theoretically, if you have been running for a long time with custom orthotics support your feet may be accustomed to, or in some sense even dependent upon that external stability and support.

I Recently received an email from a runner who used to have some Achilles tendon problems and other feet issues. He was reaching out for a consultation because he really wanted to know how he could make the transition from normal running shoes with custom orthotics support to the point where he could run in minimalist running shoes without custom orthotics supporting his feet.

Here is his question: 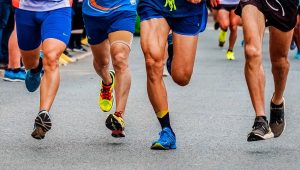 “I have been wearing orthotics for twenty five years, mostly podiatrist made hard inserts that have been heavy and fine. Six months ago I switched to a lighter type of hard orthotics.

My trainer likes 0 drop type shoes such as Merrell Trail Glove and I have been on a no orthotic shoe first with basic Asics and now the Merrell 0 drop.

My question is do orthotics provide relief from symptoms only?

Does taking out the orthotic and trying the 0 drop actually build up the 50 muscles in the feet.

I think my feet have contributed to knee and hamstring and peroneal tendon pain.

I want to strengthen my feet not just absorb shock and am wondering from the two extremes, 0 drop to Hoka type shoes where should I focus.

Should I continue with orthotics or go minimalist? Or something in between?”

This is a great question!

The short answer is custom orthotics should do more than relieve symptoms. When podiatrist talk about “custom orthotic therapy” we are actually hoping to achieve some structural realignment, and address of any sort of underlying biomechanical derangements, not just reducing symptoms.

Obviously if the podiatrist prescribes them, we have to assume you have a medical need for custom orthotic support. The base underlying assumption is that you will get worse without them. But that’s not always true.

It is reasonable to be concerned that using custom orthotics will actually hold you in a corrected position, reduce the amount of muscular activity, because they don’t have to stabilize you as much, since the custom orthotics are holding you in a corrected position, and hence you could have some weakness or underlying atrophy of those soft tissues (muscles tendons) that hold you up and support your foot.

The flip side of that and the concern many podiatrists would express, is that there is some possibility a rapid switch to minimalist footwear, from the amount of support you have from the custom orthotics and conventional running shoes could lead to a return of your prior symptoms, or possibly ligamentous sprain, since the muscles could be weaker after a period of so much support. If the muscles are weaker, theoretically the ligaments have to work harder to hold your foot in a corrected position.

Both concerns are valid.

However I am a runner and I have a very practical podiatric medical approach.

I think if you make the transition sensibly, in terms of attempting to strengthen your feet, it would be safest to go gradual in the transition.

Even to this day, I run in four different types of running shoes:

2. Newtons for speed work on the track (mile repeats)

3. Low-drop minimalist shoes for tempo runs and races up to 26.2 or Ironman

4. Hokas for a variety of mid-distance and longish runs.

I do not use orthotics and any of them.

My suggestion based on what this runner describes, is to initially alternate between three different setups:

2. On some occasions I would try to use lower drop shoes with your custom orthotic.

3. On other occasions I would try to use more normal conventional running shoes without the orthotics.

I would do that for a period of a few weeks and see if you develop any discomfort before you start to remove the custom orthotics entirely from your routine.

If all goes well, I would move to a more minimal set up.

Of course, as you are making that transition, keep track of any discomfort with a pain journal!