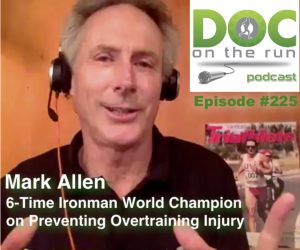 Today on the Doc On The Run Podcast we are talking with 6-Time Ironman World Champion Mark Allen about the importance of preventing preventable running injuries.

Today I am truly honored and extremely excited because we have an amazing guest on the show… one of the most inspirational figures in all endurance sports and the greatest triathlete who is ever lived.

I know that may be a big statement, but if you know Mark Allen, I know you agree.

Mark Allen has not only won 6 Ironman World titles in Hawaii, but was also the very first Olympic Distance World Champion, he won the Nice International Triathlon every single time he showed up on the starting line..10 times to be exact. Mark has won every major title in triathlon during his racing career. And because of all that, ESPN named him The Greatest Endurance Athlete of All Time.

I suspect Mark Allen has been on more magazine covers then any other triathlete in history.

In fact, I still have a copy of an outside magazine from 1998 that had Mark Allen on the cover. In that issue, there is an article where Mark was trying to help the rest of us mortals figure out how to get in shape for the rest of your life. And I think in that article, long after Mark actually stopped racing Ironman, they referred to him as “the fittest man alive!”

Everyone knows Mark Allen won at Ironman Hawaii year after year. But what many people don’t know is that for many years preceding his series of wins, Dave Scott was actually going home with the titles.

The primary reason I thought mark would be one of the best guess ever for the Doc On The Run Podcast is because Mark is one of the very few people during those early years of serious Ironman racing who never had to have surgery because of overtraining injuries. Since training methods were new or non-existent, many Ironman athletes were grinding themselves into the ground with their workout routines. Most of the top guys from that era had to have surgery or had major overtraining injuries that took them out of competition.
Fortunately for us Mark has agreed to take time out of his schedule and share his story with all of us today. 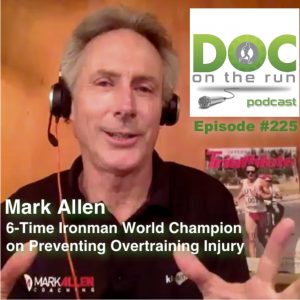 In this episode Mark is going to share with you three and truly useful ideas:

1. The keys to competing at a high-level for decades – and never have a serious injury.

2. The shift it takes to make a difference between losing and winning.

3. Simple changes any athlete can make today to stay healthy, get stronger and run longer.

Mark, welcome to the show!

Wow! What an intro, Chirs. Thanks for that!

Dr. Segler:
Well, you earned it!  It really is amazing what you have done in triathlon.

Possibly the greatest moment in in the history of endurance competition, was never caught on film. I remember as a kid watching the Ironman World Championships on television. You and Dave Scott, the reigning champion were running side-by-side Down the Queen K Hwy.

And all of a sudden, the commentator says, “Mark Allen has made a move and he’s pulled ahead.” Incredibly, the moment where you made your break and ended up running away to win an Ironman Hawaii, that moment was never caught on film.

Tell us what the moment was like, what went through your head in that moment when you finally decided it was your time to beat Dave Scott.
Mark Allen:
.

Dr. Segler:
No one can just show up in Hawaii and win the Ironman World Championship. And no one can win 20 races over a three-year period without learning what really works, and what doesn’t.

Today runners, triathletes and ultra marathoners all have an enormous amount of wisdom and experience at our disposal. We can read The Total Triathlete, you wrote with Bob Babbitt. We can listen to interviews on podcast like this. And we can even hire a coach, like you to help us identify the errors in training we make on a daily basis.

But when you started, none of that was available. You had to experiment.

Can you share with us how you set about the process of experimentation that lead you to become so successful in triathlon.
Mark Allen:
.

Dr. Segler:
When you started racing, there were no GPS watches with wrist-based heart rate monitors. There were no aero carbon frames. Periodization in training wasn’t even commonplace.

You have been very open about how you had to experiment with training through the early years. Some stuff you tried didn’t work, and some you threw it out. But some principles stuck.

What would you say were some training principles that proved truly timeless, that you still use today with the athletes you coach?

Dr. Segler:
Overtraining injuries are the worst possible affliction of an endurance runner. Obviously if we get injured, we get weaker. And then we have to start all over after we destroy hour fitness through the rest/recovery process.

I think everyone listening to this would agree an overtraining injury is just a consequence of not recovering enough before the next workout. I certainly know this to be true.

But even though I know and understand that, I was a little shocked when you actually told me the tissue damage from my usual routine, was probably preventing me from qualifying for the Ironman World Championships.

I explained to you that every year I would ramp up my running fitness in the offseason and then do the Houston Marathon in January or February as a warm-up for the training season. My thinking was starting the year off with sound running fitness poised me to build my base triathlon fitness through the rest of the year.

Of course, you listened to me and then said,

“You should probably stop doing the Houston Marathon if you really want to get to Hawaii.”

I was thinking I was just getting stronger, I wasn’t worried about getting an overtraining injury.

Burt what you pointed out, and what I was totally unaware of, was the effect that tissue damage from the early marathon was having on my athletic performance through the rest of the year.

Can you explain why athletes make the mistake of training too hard, or racing earlier the year, and how that tissue damage really does get carried throughout the rest of the season when we do a big race early in the year.

We think we should suffer, every day, in the same way we expect to suffer on race day. There seems to be a belief that daily suffering will make us strong enough mentally to overcome anything on race day.

Why do you think triathletes and marathon runners cling to this idea?

Dr. Segler:
Part of the mental difficulty in training comes down to exercising restraint. Sometimes we have to wait for the adaptations to take place, but it can be difficult.

What can we do as athletes to believe and faith in the process of building without tearing ourselves apart.

Dr. Segler:
Most athletes think about the biomechanical stresses they apply during training. We like to focus on running form to decrease pounding forces, we think about stress and strains on our bodies. But we ignore others stressors in our lives.

How much do you think work stress, emotional stress, and other forms of stress contribute to overtraining injuries?

Dr. Segler:
Several years ago I had the pleasure of attending the Fit Soul, Fit Body retreat you and Brandt Secunda held in California.

Much of what I learn in that weekend was not what I expected. You and Brant both spoke a great deal about how a small shift in spirituality or mental awareness can make all the difference for an athlete.

One of the things you talked about was how every year Dave seem to be winning, but once you finally made that switch, which happens to be really well illustrated in the book Iron War, after that, you were taking home the Ironman titles year after year.

Maybe you could just share some insight into how Brandt helped you make that switch. 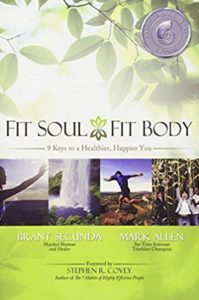 I also remember you telling a story about a German guy you trained with who would basically taunt you and tell you he was going to be you in Hawaii. Can you just share that story with us to help us all understand how we really and truly have to be patient if we want to be successful in endurance sports.

.
Dr. Segler:
On the beach with you and Brant Secunda one morning Brandt said, “The ocean is a living breathing thing. The wind is energy. All around us as energy.”

How can we as athletes in competition draw from that energy when we have those dark moments during a race?

Dr. Segler:
Your book “The Art of Competition” is really beautiful. How did you decide to put that project together and publish that book?

If you had to pick one, what would you say is your favorite quotes from that book? 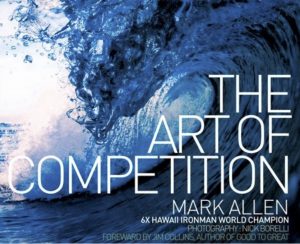 Dr. Segler:
In the “Total Triathlete” which you wrote with Bob Babbit, you said, “When you go for it 100 percent, when you don’t have that fear of ‘what if I fail,’ that’s when you learn.” What does fear have to do with getting to the next level of an athlete’s fitness? 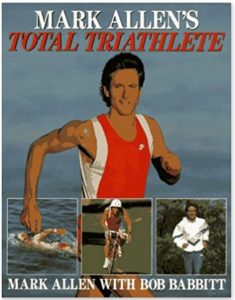 Dr. Segler:
You have been successfully coaching Ironman triathletes for decades.

How has your coaching style evolved over the years?

When athletes reach out to you to work with you personally, if there as an athlete trying to make it to Kona, or if someone would like to have you as a motivational speaker at an event, where is the best place for them reach out to directly?

It has just really and truly been an honor to get to talk with you. Thank you so much for coming on the show!

Mark, thanks so much for taking time out of your schedule to share all of your experience, insights and wisdom with us today.

Thanks for having me, Chris. See you soon….

Links Mentioned in the show: