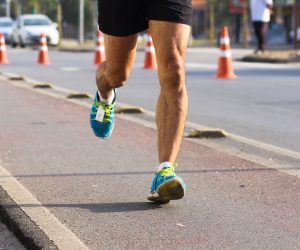 Today on the Doc On The Run Podcast, we’re talking about what happens if you run and your broken toe doesn’t heal.

I just got off a call with a runner who broke his little toe and he was trying to get back to running. So he has started running and he notices that a couple of things. One is that if he does certain things it hurts a little bit, but then if he does some other things it really doesn’t hurt.

His main question and the point of the call was to find out whether or not if he could run without pain, if that was okay mainly because he is concerned that if he runs and the broken toe doesn’t heal, that would obviously lead to problems and he doesn’t want to have a non-healed broken bone.

We had a short discussion about that and I was explaining to him that basically what doctors call a non-healed bone is a nonunion. So if you fracture the bone and it doesn’t heal, doctors call that a fracture nonunion, meaning that the bone did not unite. It did not heal.

When doctors talk about signs of healing of a broken bone, like a broken toe, we basically mean that when we look at an x-ray where the crack in the bone used to be, it’s been replaced with white material that is solid calcified bone that is visible on an x-ray.

When you have soft tissue like collagen or scar tissue between two ends of the bone and it sort of stable because it’s kind of glued together with that scar tissue, in a sense that sort of healed in a way. It’s just not the normal type of healing we talk about, at least not as physicians. So why is that important to you?

There’s two things you have to think about when it comes to having a nonunion or a bone that didn’t actually heal, when you have for example a broken toe and you start running too soon and it really doesn’t heal in the classic way that we define it, what is the implication of that. Well, if you think about the way doctors define fracture non-unions, there are two types:

If that scar tissue “hinge” bends and moves as you try to stand or walk or run, that’s not going to work. Because that’s a huge weight supporting bone. It’s the largest bone in your body that’s going to support you.

You could not function well with a non-union of a fracture in your femur. But a toe is not that big of a deal.

If you have a broken toe and you run and it doesn’t hurt, first of all, that tells me that it’s probably not going to cause much of a problem…because it doesn’t hurt. And your body hurting is what is telling you that you’re disrupting the healing process.

Another thing you have to understand is that when you get a painful nonunion, sometimes you have to have surgery. Now, out of the literally hundreds of broken toes I have seen, I have had to do surgery on a grand total of one person for a broken toe that didn’t heal correctly. One, just one. Not a bunch, one.

So statistically to me, that means that it’s really unlikely that if you run and you don’t have any pain, that you have to be really concerned and scared that you’re going to have a broken bone in your toe that doesn’t actually heal, leads to problems later and in some way will disrupt your healing. It’s not rocket science. It’s not brain surgery. It’s not that complicated. If it doesn’t hurt with whatever you’re doing, it is more than likely safe for you. Of course, talk to a doctor about it, make sure you’re on the right path and then get back to running.