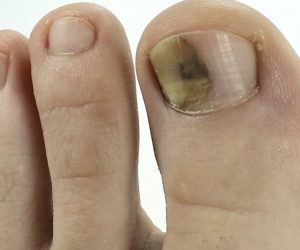 Today on the Doc on the Run Podcast, we’re going to talk about how you can tell a bruise under the toenail from toenail fungus.

Today on the Doc on the Run Podcast, we’re going to talk about how you can tell a bruise under the toenail from toenail fungus.

One common question is when somebody has discoloration in the nail, it looks kind of dark, looks kind of like a bruise, they’ll ask me whether or not it’s actually a bruise or if it’s toenail fungus. That’s a great question, and there are a couple of ways you can figure that out. Some of them are pretty simple, some of them not so much.

But the first thing you have to think about is that if you suspect you have a bruise under the toenail, well did you do anything that would have caused a bruise? Did you drop a frozen Turkey on your foot? Did you go on a 30-mile run? Did you trip over something when you were running? Did somebody step on your foot?

If you didn’t have any trauma to the toes, then it’s unlikely that you have a bruise under the nail. If it’s new and it’s not sore and it wasn’t sore when it started, it’s probably not a bruise. 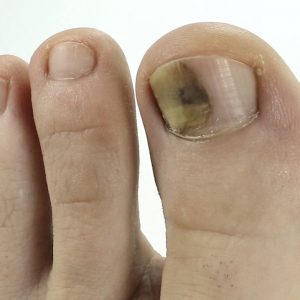 But it can also be because you went for a run and you’re just beating your toes up on the inside of the shoes over and over and over, either because you were running up and down hill, or the shoelaces were too loose and you’re sliding around in the shoes, or a whole number of different reasons. But you have to have had some trauma. So if you haven’t done anything out of the ordinary and it’s not sore, it’s unlikely that it’s bruised and it might be toenail fungus.

And when you get toenail fungus, the fungus actually starts to separate the keratin in the nail plate, light refracts through differently, and it becomes opaque or foggy, and that brown spot might be kind of splotchy. So if it’s shiny in uniform and it’s color and outline, then it’s probably a bruise. But if it’s kind of splotchy and it looks a little foggy or something like that, in those cases it may be that it’s toenail fungus.

The third way is really simple. So you want to see if the bruise is moving. So toenail fungus stays in place and spreads down toward the base of the nail. Whereas a bruise, when you get a bruise, it’s somewhere in the nail. It may be in the middle of the nail if you drop something on the toe, it might be at the base of the nail if you whack the toe over and over on the inside the shoes, but basically that bruise is going to get sort of dragged along and pulled outward by the nail plate as the nail grows.

If the bruise is moving, it is much more likely to be a bruise under the nail and not toenail fungus. Whereas the nail can grow, but when you get fungus, the fungus is spreading this direction so it doesn’t really look like it’s moving at all.

The easiest way to tell that for sure is to take a picture of it and then mark it on your computer. Just put it on a pdf or something, and measure how far it is from the base of the nail to where the bruise is. Take a picture a couple of weeks later and then see if it’s moved. If there’s a bigger distance between the base of the nail and where the bruise is, then you know that you have a bruise and you don’t have toenail fungus.

But if it seems like it’s spreading, it’s getting bigger, that’s definitely not a bruise. Bruises don’t do that. They start, they turn into a spot, the spot moves with the nail until you trim it off, but it doesn’t spread and get bigger and bigger over time unless you’re continuing to traumatize and beat up the nail.

If you’re concerned that you have toenail fungus, I have a video for you you have to check out. So we made this video. It’s on the show notes page for this episode of the podcast at DocOnTheRun.com under the podcast section. Now, it’s called the “Five Keys to Curing Toenail Fungus”.

So no matter whether you have laser treatment, you take antifungal pills, or you try to do topical treatments at home, you have to do these five things if you really want to get rid of the toenail fungus. If you have some discolored toenails, and you think you might have toenail fungus, go check out the video. It’s free. Get it now….