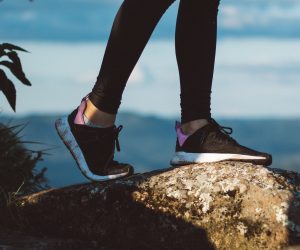 Today on the Doc On The Run podcast, we’re talking about the 3 most important ways runners prevent foot fungus.

Some runners get athlete’s foot and then because they have the infection in the skin, they shed fungus filaments and fungal spores into their shoes over and over and over. Then they keep running and sweating in those shoes. They get a ton of fungus in the shoes, and then when they’re running down hill or they beat their toes up on a long run or something like that, they wind up getting toenail fungus.

Toenail fungus is disgusting. It’s very difficult to treat, too. So, you want to make sure that you prevent the fungus from accumulating in your shoes. There really are three really important things you can do as a runner to make sure that you don’t get toenail fungus spores and filaments accumulating in your shoes, and we’re going to talk about those.

The first thing, the most important thing, is really simple. Dry out your running shoes. Whenever I come home from a run, I actually take my shoes off, and I put them outside in the sun where I know they’re going to dry. The worst thing you can possibly do is put them in your gym bag after you’ve been running at the gym on a treadmill, and then put them in the trunk of your car where it’s going to be hot and moist, and it’s not going to breathe and let your shoes dry out. You have to have moisture to accumulate fungus and for the fungus to thrive.

So, the first thing you should do is make sure that whenever you finish running, you take off your running shoes, put them in the sun, put them by a heating vent, put them somewhere where they’re going to dry out. That will really make a huge difference in how much fungus you get accumulating in your running shoes.

But the one place in your home that likely has more fungus than anything else is your bath mat. Think about it. You take a shower, you’re soaking wet, and then you step out of the shower and onto the bath mat, and you drip water all over the bath mat. If it’s really soft, and squishy, and thick, and has lots of foam in it, that stuff’s never really going to dry out very quickly. The reason locker rooms are so bad isn’t that it gets wet, it’s that it never dries out. That’s the problem is you have fungus growing where there’s lots of moisture.

If you have a bath mat, you want to wash it frequently. There’s a couple ways to do that. One of the simplest things is to cover it with a towel and step on the towel instead, because it’s really easy to wash and dry a towel, and many bath mats, frankly, will deteriorate when you put them in the dryer. You don’t want to step on a bathmat every single day and let it go for weeks and not wash it. That’s just disgusting, and it’s a simple way to accumulate fungus. If you want to prevent that, make sure you wash the bath mat, and don’t just step on the bath mat every day and think that it’s going to be okay, because it’s not.

Now the third thing is also something that most runners understand, most people already know, but you should not walk on the floors in the locker rooms. When I go to the gym and work out, I always have flip flops with me, and when I go to change, I take the flip flops, put them on the floor, actually step out of my shoes and onto the flip flops. I do not step on the floor. When I take my kids to the pool, I actually put them on a bench, and they stand up and change on the bench. In fact, my son who’s now been doing that for many years, he sort of instinctively stands up on the bench pretty much every time. He doesn’t step on the floor. He’s really careful about that.

There’s tons of fungus on floors where people come and go and keep the floor wet all day. Locker rooms are probably the best example of that, and think about it. When’s the last time at your gym, which you probably think is a nice gym, which you probably think of as clean, when’s the last time you saw someone with a mop in the locker room? Probably not very frequently. If so, then you probably have tons of fungus in there, and the last thing you want to do is go change clothes, get out of the shower, step on the floor, take those fungal spores, get them stuck to the bottoms of your feet, and then put them in your shoes where they’re going to start to grow and reproduce.

These are some really simple strategies to reduce your exposure to the foot fungus so that you don’t get athlete’s foot and toenail fungus. If you’ve had toenail fungus, and you’ve treated it with laser, and you spent all the time and effort and money to do that, the last thing you want to do is reinfect it. So make sure you decrease your risk of exposure to the fungal filaments and the spores by washing your bathmat, making your shoes dry after you go for a run by drying them out in the sun, and making sure you don’t step on the locker room floors. Those three things are probably the highest yield, best strategies for reducing your exposure to the foot fungus so you don’t get reinfected.