Today on the Doc On The Run Podcast, we’re talking about why arch supports might actually make your arch hurt worse.

A couple of days ago I saw a guy who is a runner and he started having some arch pain in his left foot after he was doing a run. And, he didn’t remember anything remarkable during the run. But one of the things he noted was that after he developed this arch pain, he got some arch supports, and they actually made his arch hurt a lot worse. So he called me. I went to his house, I looked at his running shoes, I looked at his foot, figured out what’s going on, and then helped him understand why these arch supports were actually making him worse and not better.

So while I was talking to him, I thought that it would make an interesting episode because I do hear this from patients in three different conditions, really, when somebody gets arch supports and they start getting more pain and not less. And so, that’s really frustrating. When you’re a runner, you want to go run, you want to exercise, you want to be outside, but you start getting worse from what you think is going to help. And arch supports are supposed to take pressure off of the arch, they’re supposed to support the arch, they’re supposed to make you feel better. But sometimes, arch supports can actually complicate another problem and make it feel a whole lot worse. 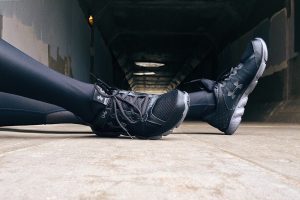 So in this guy’s particular circumstance, what he did was he went for a run. He was running on sandy unstable surfaces, running up hills, and the surface was irregular. And although it wasn’t really a long run, or what he thought of as a brutal workout, the way that his feet were moving and sort of sliding around on that unstable sandy surface caused some overwork and abuse of the FHL tendon, or flexor hallucis longus tendon. Now that sounds like a big term, but everything in medicine is just descriptive. Even though it may sound like it’s some really fancy thing. Flex means to pull down. Hallucis is the medical term for the big toe. And longus refers to the fact that there are two tendons that pull the big toe down.

One of them is short. That one is starting and ending inside the foot and that’s called the brevis, and then there’s a longer one that goes way up in the back of your leg, deep to your calf muscle, and then comes down the back of your ankle all the way out to the big toe. That’s the longer one. And so we call that one the flexor hallucis longus tendon.

And when you use that tendon too much, if you’re doing something like running up hills, particularly hills that are on an unstable or undulating surface, or sandy surface, or wet grass, or muddy surface, or something like that, sometimes your big toe can have to do a little bit extra work, pulling down more, trying to keep you stable, and you can irritate the tendon sheath, or the little tube that goes around that tendon as it goes across the top of your arch.

Now, if you have just plantar fasciitis, or just inflammation of this ligament, and you stand and you put pressure on the ligament, if you get arch supports that hold you in a corrected position and stabilize your foot, it actually decreases some of the tension to the plantar fascia and it makes you feel better. But if you have inflammation of the FHL tendon, or the tube that goes around that tendon, and you put arch supports in your shoes, what happens a lot of times is the arch support is pushing upwards right against the tendon. And it’s basically squishing the tendon that’s inflamed between the hard arch support and the bones on the inside of your foot, or your instep, right above the arch, and you’re squishing the tendon and it starts to hurt.

So that was what happened in this guy’s case, and he really just needed to do something to reduce the inflammation in the arch, get that tendon to calm down, and then he’d be good as new and he would be fine. But, in the meantime, while he was trying to get that better, it was better for him to just take the hard rigid over the counter arch supports out of his shoes and just use the stock inserts that came in the shoes.

The other condition when people can get pain from arch supports is if you have really, really flat feet. Over the counter inserts are made to fit most people. And what that means is that they’re basically molded to fit people that have a relatively normal arch height. But if you have feet that are very flat, then your arch basically collapses on top of the insert. But you have this hard lump of an orthotic trying to push your foot up, and it creates a lot of pressure right underneath the arch, usually at the navicular bone. And then, that causes irritation where the posterior tibial tendon actually attaches to the navicular bone right over your arch.

If you have really flat feet, you may not be able to tolerate over the counter inserts. And if you have a partial rupture in the plantar fascia, same thing. You just might not be able to tolerate the inserts that are pushing right against that tear. And, if you have inflammation of the tendon that goes out to the big toe called the flexor hallucis longus tendon, or FHL tendon, then it may just be too much pressure right against that structure.

One way to figure that out though is you can basically just try to use the road underneath you to do what the inserts would do. The inserts are trying to tilt your foot outward into what we call a supinated position, which is the opposite of a pronated position. Supination is just the opposite of pronation. So one thing you can do is try to go for a run, and then alternate sides of the street where the street slopes right next to the gutter.

And so if you run in the street and you notice that your left foot really hurts when you’re running with your back to traffic, that’s because your left foot is pronating and sloping down. If you run on the other side of the street then it flips that force around and supinates the foot instead of pronating it, and starts to really change things dramatically. And if you experiment just a little bit, and you figure that one side of the street is way better for that foot than the other side, well then that’s where you run.

Go to the show notes episode for this particular podcast. And at the bottom of there, there’s a video you can watch and, specifically, it’s made for people with plantar fasciitis, but it can work for a number of different conditions. And it just shows you how to run on the right side of the street and decrease the structures to your foot in the arch like the plantar fascia. And that will really help you understand how you can just choose a surface to do what the orthotics would do because you can use the road surface underneath you to hold you in a better position and help you get back to running sooner.

If you want to run after an injury, the side of the road will either increase or decrease the stress on the recovering foot.