Today on the Doc On the Run Podcast, we’re talking about why fracture walking boots fail to heal plantar plate sprains in runners.

One injury that can affect a runner and causes pain in the ball of the foot, basically at that padded area at the base of the toes that you use to push off when you’re running, is a plantar plate sprain. A plantar plate sprain is actually one of the worst possible injuries for an injured runner. They can be notoriously difficult to heal quickly if you don’t do everything right.

Plantar plate sprains also have a tendency to evolve into a chronic nagging pain that just keeps you off of running and training for months. Even worse, if you don’t treat it correctly, the plantar plate ligament can get so weak and degenerated from all of that chronic inflammation that you even get a hammer toe. Unfortunately, one commonly recommended treatment for plantar plate sprains is a fracture walking boot.

Even though fracture walking boots are a mainstay of treatment, many runners will be horribly disappointed to find out how long it really takes to heal a plantar plate sprain if relying solely on the boot for the healing process. Now really, when you have a plantar plate sprain, what you have is a little ligament on the joint at the base of the toe. Usually, it’s the second toe. You have pain, inflammation there, and it’s a sprain, so a sprain means you have some teeny tiny little micro tearing within the ligament that stabilizes the toe and holds it down against the ground.

When you get a plantar plate sprain, you really have three different problems. You have too much tension being applied to the plantar plate ligament, which is pulling on it and preventing it from healing. You have direct pressure on the plantar plate ligament, because you’re basically standing on it every single time you take a step, stand up, walk, any of that. And you also have inflammation, which is supposed to heal this thing, but inflammation causes trouble over time because the inflammatory fluid in that joint actually can degenerate and make it worse. 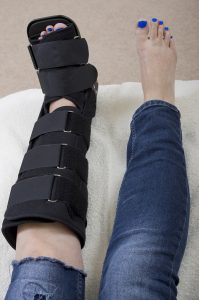 Well, a fracture walking boot only partially addresses a plantar plate injury, because you’re really only addressing part of one of these three key problems. I think it’s important to understand why a fracture walking boot really isn’t a great idea for a runner when you have a plantar plate injury. If there was one treatment that would work all the time consistently for everybody, trust me, every doctor would do it, including me. But as I’ve said before, I don’t think runners should be treated with this sort of cookie cutter approach, where everybody with a certain condition gets a fracture walking boot or is just told to stop running for four weeks or anything else.

It has to be customized. It has to be personalized. It has to be made especially for you and your unique circumstances, and frankly, your running goals as well. Let’s talk a little bit about why plantar plate sprains are really not going to heal if you just wear a fracture walking boot. The first thing we’ll talk about is tension. The idea with a fracture walking boot is that you decrease the motion and you decrease loading through the forefoot. And the way that works is that, when you step on your foot and you have it in a boot, the boot has a curved outsole on the bottom, and you basically roll forward. You don’t bend the toes. You don’t bend the ankle. The boot holds you still, but instead, you have a round platform underneath you that you roll across.

When you do that, you also move your toes a little bit to stabilize yourself, and because you’re moving your toes around, every time you wiggle your toes, you’re applying tension and stress to the plantar plate ligament. Even though we think of a fracture walking boot as something that can hold you completely still, it doesn’t really hold the toes very still, and for that reason, it doesn’t really do that much to decrease tension in the plantar plate ligament when you’re wearing the fracture walking boot.

Now, the second problem is pressure. As I said, you stand up, you push down with the metatarsal bones and the ligament is underneath the metatarsal bone, between the ground and that bone. It really is between a rock and a hard place, so when you’re walking around in the fracture walking boot, you’re applying pressure to the plantar plate ligament and you’re pushing on it. Granted, it decreases some of the load through the forefoot, just because it does have that curved sole that we refer to as a rocker bottom sole, and it does decrease some of the pressure through that area, but it still applies pressure. If you just take the fracture walking boot and you don’t modify it, you don’t do anything to decrease the pressure on that specific spot, it really is not going to help you in terms of that much a decrease in pressure. But you get all the bad stuff with the boot, right? You get weakness, stiffness, all that.

The third problem is inflammation. Remember, you have an inflamed, irritated joint. It hurts. You have swelling on the inside of the joint. The synovial tissue inside the joint is actually swollen, irritated, and inflamed. When you first have an injury, that inflammation is your friend. You get increased blood flow into that area. It brings in cells that can start repairing the tissue and cleaning up any and removing any debris, any tissue damage. It can start trying to fix that problem.

Then what happens is the chronic inflammation makes the other existing collagen fibers in that ligament weaker, and over time, the toe starts to dislocate. That’s why some people call plantar plate injuries “pre-dislocation syndrome.” Because if you keep irritating it, you keep it inflamed and you keep it in a state where it’s going to get weaker and weaker and weaker. The toe will eventually dislocate. That means you get a hammer toe, so then you have a permanent deformity that can cause a whole host of other problems as a consequence of all of this minor injury that’s just continued on and on and on in a chronic fashion and hasn’t gotten better.

And of course, as I’ve said many times before, when you use a fracture walking boot and you’re a runner, particularly if you use it for four weeks, six weeks, three months or longer, you’re asking for permanent damage. You get weaker. You get stiffer. You get changes in your neuromuscular connections that give you good running form. Your running form starts to fall apart. Your aerobic fitness degenerates. Your running-specific fitness gets obliterated, and as a consequence, you get weaker and weaker, and in fact, may get permanent damage in the sense that you may never ever run as fast as before once you’ve been in a fracture walking boot too long.

Although it can be useful to wear a fracture walking boot for a brief period of time when you’re a runner with a plantar plate sprain, that is only for a brief period of time in most cases. You do not want to just put on a fracture walking boot, start walking in it, and then wait and wait and wait and see how long it’s going to take you to heal, because that is a recipe for disaster. That is not a recipe for healing.

Most of the runners I see who call me when they’re frustrated, and they want to get a second opinion, because they’ve been wearing a fracture walking boot for six weeks, eight weeks, or 12 weeks, they probably could’ve done some other things differently and dramatically compressed that healing process. And by the time they call me, they’ve already missed the boat, so they have to shift something still, but they should have done some bigger shifts earlier. That’s why we created the plantar plate sprain course for runners, to try to show people initially what you can do.

It does work. Now, I myself have had two plantar plate injuries. Of course, I recognize them immediately. I do something immediately, and I don’t wear a fracture walking boot. I have done a couple of things to address the tension and the pressure and the inflammation to the plantar plate ligament, and continued running, and I’ve continued to get them to heal, so I would never just put on a fracture walking boot, walk around in it, keep my fingers crossed, and then hope to make it to my race on time.

That is not a recipe for success. However, if you do some things to address the tension, pressure, and inflammation around that plantar plate ligament, you really can heal faster and get back to running sooner.

Want more detail?  Check out the course we created which show you EXACTLY how I treat plantar plate sprains in runners, so you can keep running!