Today on the Doc on the Run podcast, we’re talking about whether or not you can get stress fractures in the toes when you’re running.

This question comes from a runner who sent in the question after she found the podcast on stress fractures and what she wrote in, she said, “I’m a fairly high mileage runner, 60 to 70 miles per week and I definitely wear running shoes that have ample room in the toe box. They’re sized up and they’re wider, using guys shoes versus girls shoes,” but she experienced pain on the top of the middle toes, the third and the fourth toes after a seven and a half mile run today and that never happened before.”

“Are stress fractures in the actual toe area possible? It was mostly pain when bending the toes and walking.”

Well, thanks for sending in your question. I really appreciate it. It does help to get these kinds of questions, because this is exactly what people wonder about when these weird things happen.

The first thing is…yes!..it is possible pretty much for anything to happen, but you have to really think about the mechanism of injury and try to figure out whether or not it’s really a stress fracture or really something else. And obviously if it is a stress fracture, is it in the third toe, the fourth toe, one of the metatarsal is in the foot. What is it actually that’s causing the problem? This is a great question. So, obviously this never happened before.

So, when you get a stress fracture, what is that? Well, it’s too much stress applied to a specific bone that causes inflammation within the bone and if you continue to apply the same kind of stress to that bone over and over and over, it actually starts to crack and gets weaker and then can break into two pieces eventually, if you run on it long enough.

But initially, it’s usually just inflammation in and around the bone that’s causing the discomfort. It’s because of all the extra fluid in there taking up space and that causes discomfort. That’s what you notice. So if you think about it, when you run, the toes are pretty flexible, right? They move a lot and they move out of the way when you push on them. The metatarsal bones that are in the ball of the foot, where you’re landing and you’re pushing off with a ball of the foot, so there’s a whole lot more stress in the foot itself than there is on the toes. I guess if you’re doing a ton of running where you’re somehow really beating up the toes, it’s possible. But stress fractures in the toes themselves are extremely, extremely rare. Doesn’t really happen very much. Stress fractures in the metatarsal bones, the bones in the ball of the foot where the toes connect to the foot, that’s extremely common.

However, the thing that often confuses people, and the reason this really does kind of lend people to think that there’s a problem in the toes, is that you get pain, bruising or swelling in the toes themselves. If you get a metatarsal stress fracture and then you’re using crutches and you’re walking around with your foot hanging down with your toes pointing down, the stress fracture actually can cause bruising because the bone cracks and it actually bleeds. And then when your foot is hanging down and you’re on crutches, the blood in the foot around the metatarsal drifts down and it appears as a bruise on the toes.

And so I’ve had lots of patients who will say, you know, “My foot really hurts, but I think I broke my toes.” And they will literally tell me initially, “I think I broke my toes.” I’ll say, “Well, did you kick anything? Did you trip over anything that somebody stomp on your toes?” Well, if the answer’s no, then how’d you break your toes? And they’ll say, “Well, I didn’t do any of that, but I was doing a long run and it started hurting in the ball of the foot. I was like doing a 20 mile run or something and then I still had to run five miles the rest of the way back to the car to get done. And that’s why I think I have broken toes now. I was running a long way. Maybe it’s stress fractures in the toes,” but they have pain in the foot. But the bruising is in the toe, and you think obviously, where the bruise is, that’s where the problem is.

And that’s the same case with the runner that sent in this question. You know, she has pain in the toes, but it’s really from bending and flexing the toes when walking. So, it happened with a seven and a half mile run. So somebody who runs 60/70 miles a week, seven and a half miles. It’s not a really long run at all.

But it’s not necessarily that run, because if you’re ramping up your mileage, if you’re in your progression and you’re doing a hard week, maybe the seven and a half mile one was a really fast run. So fast runs apply more stress than easy, long runs. Easy, long runs, it’s a lot of stress if you really beat up your feet running in the same way, like on the same side of the street without varying your routine at all, they can apply a lot of stress. But I think most runners who get injured either do it because they do a hard run right after a long run where they’re still kind of recovering, there’s still a lot of tissue damage that has to heal and they haven’t yet fully recovered from that and then they go do a really hard, fast run that may be something like seven and a half miles.

But when the pain is in the ball of the foot, it’s not necessarily in the toes. And so a wide toe box can’t help. But also if you’re a woman and you buy men’s shoes, which many people do, the heel is much wider in men’s shoes than it is in women’s shoes. And most women have a much more narrow heel than men. And so when you run in men’s shoes, your foot can move around quite a bit just because the hell is too loose basically. But if your forefoot is wider and you feel like you need that space, you don’t really have many other options.

Now the other problem is that, you know, she says that she has a pain in the toes. So as soon as I hear somebody say that they have pain in the toes, well first of all, if you have a stress fracture in the toes and you squeeze the bones in the toes simply like that and it doesn’t hurt, you probably don’t have a problem with the toes. They can be swollen a little bit, and then it will hurt if you squeeze them, but if you move it and it doesn’t hurt any, squeeze each bone and all of the bones feel basically about the same in terms of tenderness? That’s probably because there’s swelling in the toes and not because there’s an actual stress fracture in the toes.

But if you then try to test the toes to apply strain to the plantar plate or the joint capsule on the bottom of the foot and that hurts, then you probably actually have a plantar plate sprain and not a stress fracture at all.

This is what we teach in the ball of foot pain course is that, you know, you can tell the difference between a metatarsal stress fracture and a plantar plate sprain. And the whole course goes through exactly what I do to diagnose and treat those things and how you can tell yourself what the difference is between those things. But you have to think about the mechanism of injury. 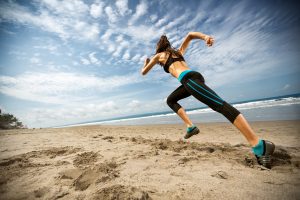 If you’re running and you had some steps on it, well, that also can cause a plantar plate sprain, because you land on the edge of a step and it actually bruises or injures the plantar plate ligament at the bottom of the joints where the toes connect to the foot at the ball of the foot. All of those things can cause an injury to the plantar plate.

But you have to figure out what the problem is in many times just hearing like what the actual seven and a half mile run really looked like, like whether or not it was lots of hills, what shoes exactly you were using, what your speed was like, whether or not you’re changing direction, all of those things can help you figure it out.

There are several question I ask every injured runner who calls me when they think they have a stress fracture.

The Stress Fracture Self-Assessment Worksheet will help you track those changes as they happen.  This worksheet can help you figure out whether or not you have stress fracture.

Get the Stress Fracture Self-Assessment Worksheet..print it out…the PDF it is right here…just click on the link and print it out. Fill it out. Use that information to make the right choices as get you back to running. 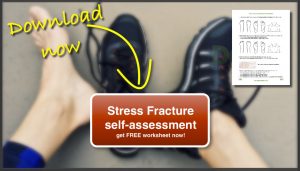