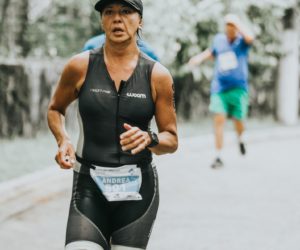 Today on the Doc On The Run Podcast, we’re talking about whether or not you should ramp up your running when it doesn’t feel like it doesn’t hurt much worse when you resume running after an injury.

This is a great question, and it’s one that usually happens to runners who get a metatarsal stress fracture or Achilles tendinitis or peroneal tendinitis, and it can be true for any of those injuries, but most commonly I hear this for people coming back from a stress fracture.

You get a stress fracture, you have injured the bone, you do some stuff to reduce the stress to the bone, you let it start to heal, and then appropriately, you resume your activity as soon as the bone is strong enough to absorb that activity. As soon as it gets a little bit stronger, you can do more stuff. You can move it more. You can stress it more, and you should start ramping up your fitness so you don’t just lose all of your running fitness.

Most people go through that pretty successfully for their first couple of weeks. Now, it’s usually somewhere around two weeks, three weeks, or four weeks where this question comes in where they say, “I’m back to running. I have done some stuff to modify the stress that actually happens to the bone when I run. I’m running, and I have been ramping up my mileage, and now I’m up to maybe 10 miles or so on my long run, and I feel a very small amount of pain at the end of those long runs, but it’s not a lot of pain. The big question is, is whether or not it’s okay to really ramp up my training and keep running longer, keep running harder if it really seems like the very mild, barely-noticeable pain isn’t really getting worse.”

The way you really should think about this is you have to remember, what is your overall goal? If your overall goal is to do the Boston Marathon, and it’s February now, and you’re trying to do the Boston Marathon in the middle of April, you certainly cannot afford to have that injury recur. You can’t afford to have a stress fracture show up again in a few weeks when you’re almost at race time. You have to be very careful about that to make sure that you don’t injure yourself and wind up with a different or recurrent overtraining injury.

Then if you go from that point to ramping up your activity even more, well, what do you think’s going to happen? What’s going to happen is you’re going to surpass that ability of your body to physiologically absorb the stress that you’re applying to it because you know you’re going to be applying more stress, so you start applying more stress, and what happens? The injury gets worse. It will predictable get worse. You should not have pain at the end of your long runs. If you do, you’re either running too fast, you’re running too far, or you haven’t done enough stuff to reduce the stress to that bone when you run. That’s the key.

You have to make sure that you’re being cautious the way that you run when you have a stress factor and you’re returning to running and you’re ramping up your fitness. Remember, it’s a stress fracture. It’s too much stress applied to the bone. It’s not enough recovery. It’s too much force. It’s too much stress. Running is only one part of that equation, so you have to do everything that you can to decrease the stress and strain applied to the bone as you return to activity. If you’re having pain while you’re doing that activity, then you’re doing too much. If it stays the same, that’s okay, but keep in mind, your goal is not to keep running the same distance with the same amount of pain. Your goal is to return to running at a much higher level than you are right now.

If you’re having pain right now, and you’re not getting worse when you do these runs that you’re doing right now, well, you could continue to sustain that and perhaps not get better, but that’s not your goal. Your goal is to run more, run harder, run longer, and run faster, and to do that, you have to reduce the stress further. That may mean that you just have to back off a little bit just temporarily to let the healing continue a tiny bit to reinforce that bone, make it a little bit stronger so that you can then continue to ramp up and build more fitness without having another overtraining injury. That’s the key. Make sure that you reduce the stress, make sure that you’re doing everything you can to maximize your recovery, and you’ll get back to running sooner.