Doc On The Run lectures on “When do runners REALLY have to stop running?” at IFAF 36th Annual Hawaii Seminar - DOC

Doc On The Run lectures on “When do runners REALLY have to stop running?” at IFAF 36th Annual Hawaii Seminar 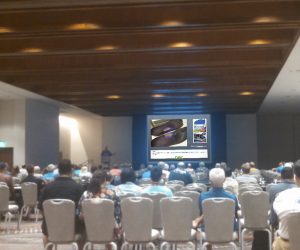 Maui, Hawaii. Today Doc On the Run (Dr. Christopher Segler) was lecturing to a large group of podiatrists, sports medicine doctors and foot and ankle surgeons at the International Foot & Ankle Foundation’s 36th Annual Hawaii Seminar. Dr. Segler was invited to speak on the topic of “When do runners REALLY have to stop running?”

When asked about the goal of the lecture, Dr Segler replied, “It is well known that it takes months to build one’s fitness as a runner. So the last thing an injured runners needs is to stop all activity and sit idly by watching that fitness vaporize. The goal of the talk today was to educate physicians about the methods I use to keep runners running while they recover. Recovery and running do not have to be mutually exclusive. It just takes an open mind-set and intimate understanding of the athlete’s specific running goals. It is a little more complicated and perhaps requires a bit more thought, but we as physicians owe it runners to apply the same dedication to the athlete’s recovery the same way the athlete dedicate’s effort in training. We need to work hard together to help the runner achieve his or her goal.”

The best question of the session came from a doctor who sees runners and triathletes from Boulder, Colorado who asked, “How long would you wait before you let a runner with a second metatarsal stress fracture run?”

The answer from Dr. Segler was, “That is a great question. It all depends upon the runner’s goal and the severity of the stress fracture. In general, it is best to allow the runner to run, as long as they will heal in time to run their most important race, within the runner’s goal time. It also depends upon their overall health and the number of strategies they use to accelerate the healing process and recover faster. There is no one right answer.”

A second question form other doctor was, “Why do runners get so upset when we tell them to swim?”

The answer from Dr. Segler was, “Interesting question! And it is true that many runners will not readily accept swimming as a sufficient substitute for running. Look, I am a triathlete and I don’t like to swim. I would rather run. Running make me feel fit and strong. I think that is part of the reason runners get irritated when doctors tell them to swim instead of running.”

First of all, they are runners, not swimmers.

He added, “Also, many triathletes know that swimming is very technique dependent. They know that if they add 5 hours of week to swim training, they may only chop 5 minutes of their Ironman swim time. But if they add 5 hours per week of cycling or running, they could chop close to an hour off their Ironman time. So many triathlete already view swimming as a low-return activity.”

If you are a runner reading this, what is your answer? What should Dr. Segler tell other doctors? “Why do runners hate it when doctors tell you to swim?” Post your answer on Twitter, and tag @myrunningdoc.