#639 Are calcified Achilles tendons more prone to rupture in runners?

Are calcified Achilles tendons more prone to rupture in runners? Well, that’s what we’re going to talk about today on the Doc On The Run Podcast.

Today’s episode actually comes from a question that was sent in from one of the YouTube viewers, and the question specifically was, are calcified Achilles tendons more prone to tendon rupture in runners? That’s a great question.

I think if you ask most doctors, their answer’s probably going to be yes. But since I got this very specific question, I actually wanted to see if there’s any research that actually shows whether or not Achilles tendons that have calcification or ossification within them, whether or not they’re actually more prone to rupture in runners. Now, I’m not talking about just my opinion or what I think might be true, but what may actually be in the medical literature published research, this shows whether this is true or not. So let’s talk about a couple of things I found.

First thing is that you would think there’d be a lot of research on this because Achilles tendons get injured a lot in runners. They’re the largest tendon in your body. They’re very prone to injury. And the first thing I found that might be interesting for you is that in 2010, there was a study published that reported there had been a six-fold increase, so six times as much, 600% increase in Achilles tendon injuries in athletes over the preceding 10 years. So that’s very interesting. So they basically said in this study that this is probably attributable to more people doing endurance activities, CrossFit, explosive, high intensity interval training, those kind of things, more than something in the water. It seemed like it was actually activity related. And that may be true.

In 2015, there was an article published in the Journal of Applied Physiology entitled The Relationship Between Tendon Stiffness and Failure of Meta-Analysis. Okay, Meta-analysis, first of all, is a fancy term for looking at a whole bunch of different studies and combining them and analyzing the comprehensive data that comes out of all of those combined studies. Now, in this, they actually looked at 50 different studies and combined them into one study, which was the meta-analysis. And so they’re trying to figure out, okay, is tendon stiffness a thing that actually leads to failure? And by failure they mean rupture, where it actually breaks because it doesn’t have enough elasticity and it actually is too stiff and it breaks. Well, very interesting, all the stuff that’s in this study, for lots of different reasons. Let’s talk about that.

The first thing is that there was this pooled mechanical data, so it’s mostly on the mechanics of the tendons, the actual mechanical properties of the tendons. And they looked at all kinds of samples of different species, not just human tendons. So we’re not talking about just Achilles tendons in runners or even people, they looked at humans, horses, rats, goats, cows, kangaroos, mice, sheep, pigs, even wallabies if you can believe it or not. And again, it wasn’t just Achilles tendons, it was also like the tibialis anterior tendon, biceps tendons, biceps when you do biceps curls, hamstrings, all kinds of different tendons in different species. And what’s really interesting is you look through the entire study, not one mention of calcification in the tendons, and you’d think that would be important.

Calcification, by the way, is when you get what looks like bone forming within the tendon, and that can ha 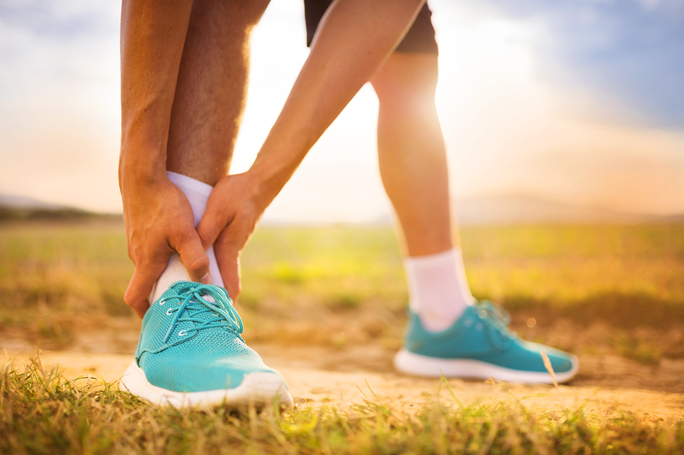 pen for a variety of reasons. It can happen because you take certain medications, it can happen because you had trauma or surgery, you’ve injured the tendon in some way and it responded with getting calcium deposited within the tendon. But it’s not complicated. The tendon is made of collagen and it stretches because it is elastic. Right? If you have calcium, which is bone, bone doesn’t really stretch. It’s not very elastic. And so the idea is that if it’s stiff and it doesn’t really stretch, it’s more fragile. And if you suddenly load it when you’re running or doing exercises like box jumps or something like that, if you push off suddenly, then you could actually rupture the tendon.

Given that there wasn’t any actual direct research, number one on runners rupturing their Achilles tendon because of calcification or risk associated with it, I did all kinds of searches, specifically looking through the medical research. Now, if you go to the National Library of Medicine and you look up all the published studies in medical journals to see what can be found to prove it, well, here’s some of the stuff that I found when I was searching. So one of the things I searched specifically within the titles of the studies to see if there was something that had a title that included calcification and Achilles, that seems simple enough. What’s really interesting is when I did that, nothing came up specifically with calcification of Achilles tendons.

What I found mostly was that when we looked for things like calcification and stiffness, rather than finding anything at all related to the Achilles tendon, what I did find was lots of stuff on arterial or muscle stiffness, not tendons, but arterial or muscle stiffness, specifically what is really related to coronary arteries or cardiac muscle, not your gastro muscle. It’s connected to the Achilles, but heart stuff, the blood flow to your heart, the arteries in your heart, the muscle in your heart, all these things that get calcified and lead to heart attacks, almost all of it. Now, in that circumstance, I actually found 77 different studies with those terms of stiffness and calcification, hoping to find stuff on the tendons. Well, I really didn’t. All of those things were related to either heart blood flow or heart muscle, except for a couple.

One of those, also interesting, was a study entitled Tissue Calcification and Wrist Stiffness in Guinea Pigs. Never in a million years did I think somebody would be so interested in wrist stiffness in guinea pigs that they would actually publish a research study on calcification of wrist stiffness in guinea pigs. But marvels never cease. So that was there, but not Achilles tendon ruptures because of calcification in athletes. That was not there. One thing that was in there in terms of the 77 studies I found with stiffness and calcification as part of the title is that there was a study about calcification in soft tissue around orthopedic implants, like when you have a hip replacement or something, but not in the Achilles tendon.

What does all this stuff really mean? Well, we know that for one, if you have decreased pliability or stretchability of the Achilles tendon, it’s more risk to rupture. The reason I know that is that there was a study entitled Impaired Tensile Strength After Shockwave Application in an Animal Model of Tendon Calcification. So this is not a study in humans. This was actually turkey tendons, which when they had calcification of turkey tendons and they did extracorporal shockwave therapy, which is something that your doctor may have recommended to you, there’s more prone to rupture. Now, the researchers in this study did not attribute the probability for rupture or the propensity to rupture to be attributable to the calcification in the tendon in these turkeys, but they actually thought the shockwave therapy made it more prone to rupture, which is also interesting.

If it is stiffer, there is research that shows that if it has stiffness in the tendon itself because of the calcification or because you’re dehydrated or anything else, well, it is more prone to rupture. If you have a tendon that has calcification in it also, there is a disease process going on in some respect. Now, maybe it’s because the tissue in the tendon got traumatized because you partially tore it, split it, ruptured it a little bit on the inside or something like that at some point, and through the healing process, it actually got the calcification in it. Well, it is already injured, it’s been injured before, more likely to actually rupture later because of that.

It’s fascinating to me that there’s no actual direct research that has taken tendons and determined whether or not they’re more likely to rupture because they’re weaker just because of the calcification. But if you think about how we do studies, it’s pretty tough. Lots of animal models in these studies that I’ve found, very few on humans. And to do it, it’d be very difficult to do. Obviously if you had calcification in your tendon, there’s no way a researcher would take it out of your leg, attach it to a gizmo to measure the amount of strength it takes for it to rupture, and then take your healthy tendon out of your other leg and see how much stress it takes to rupture it. We just can’t do that kind of research on people.

Whether or not it’s ever going to be published, I don’t know, but I’ll bet most doctors, including me, and maybe yours, would also suggest that if there is calcification, it’s probably more prone to rupture. What you need to do is control all the variables to make sure it does not rupture. Because if it ruptures, that is a very, very bad thing for a runner. So think about all the other variables you can control, your hydration, the overall health of the tendon, the things you’re going to do to strengthen the muscle that supports the tendon, the things you do when you run that actually decrease the forces going through the tendon. All of those things can help you decrease your risk of having trouble later if you want to continue to run. But great question.

If you enjoyed this episode, please like it, please subscribe. If you want to find out more about Achilles tendons, take a deep dive into that. You can join me in a live masterclass that I periodically do, and you can get it for free. You can go to docontherun.com/Achillesmasterclass. So go check it out and I’ll see you in the training. 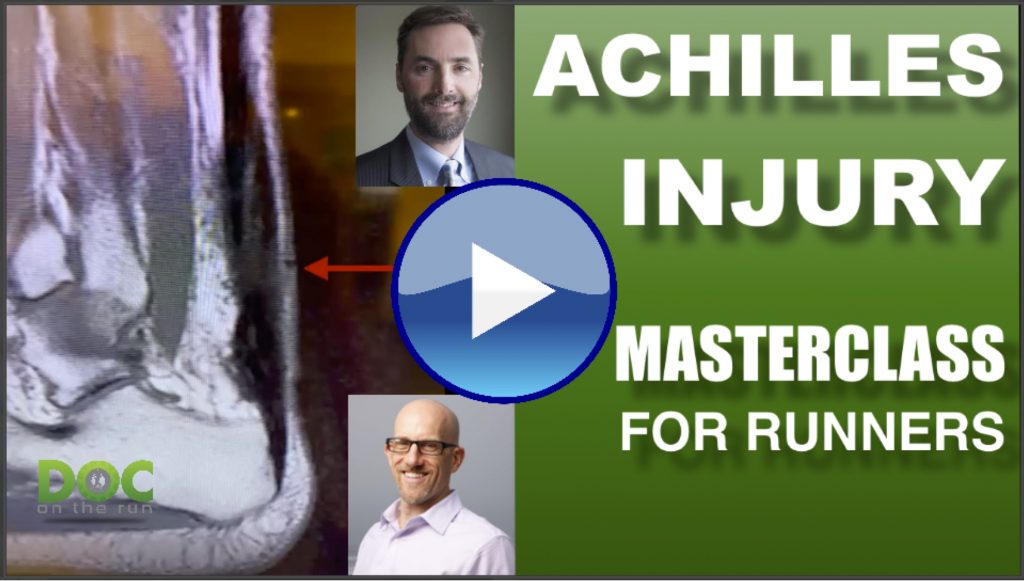