Today on the Doc on The Run podcast, we’re talking about tendon surgery for plantar plate repairs.

If you are a runner and you’re thinking about surgery, you’re probably maybe thinking about a second opinion, but maybe just doing your initial research, but some doctor has probably already suggested the idea of surgery to you. As I’ve described in other videos and other podcasts, there are basically four kinds of procedures that a doctor might offer you as a component of a repair when you’ve actually torn or ruptured the planter plate ligament at the ball of the foot.

Obviously if you want to get back to running and you’re desperate enough to think about surgery, you’ve really got to understand these procedures. So this is one of the four categories is tendon surgery and we’re going to talk a little bit about that, about what it means, what tendon is actually operated on and what the procedures really entail so that you can understand that a little bit better.

So again, I’m a podiatrist, not an artist. My handwriting’s terrible. My drawings are worse. So you can make all the negative comments you want about my drawings and my handwriting. I don’t really care, but this is what we’re talking about.

When we’re looking at the foot, you’ve got the toe. That’s normally sitting like this, right? You’ve got the metatarsal bone that comes down at the ball of the foot and then you have three bones, the proximal phalanx, the intermediate phalanx and the distal phalanx. What happens when you get an injury to the plantar plate, that attaches to the base of the proximal phalanx bone is that it gets weaker. So if you tear it, if you rip it, if you pull it apart and the ligament retracts in that direction, then what happens? Well, the toe drifts up. So then you’ve got a situation where you start to get a hammer toe, this bone, because that ligament is ruptured, it actually starts to drift upward and then you get this.

What you have is, now you have a hammer toe, and that can only happen if you have weakness and laxity in the plantar plate ligament. So if your planter plate ligament was intact, but then it ruptured because it’s torn, then that allows this toe to actually drift upward in that direction. Now you have something that attaches to the base of each one of these bones and that’s what we’re going to talk about here. 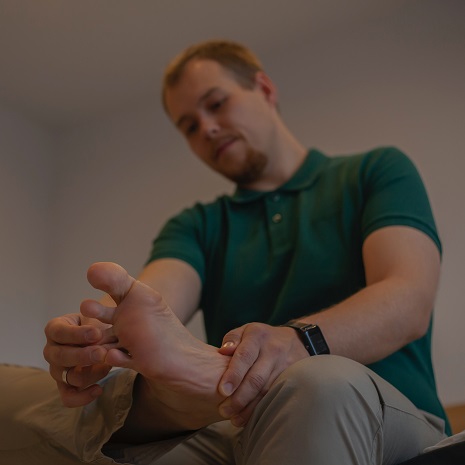 You have the planter plate ligament attaching here. You have the short flexor tendon that starts and ends within the foot coming out and attaching here and then you have another tendon that’s the long flexor that starts up in the leg, come all the way down, comes over here and actually attaches out here. It actually splits and overlaps.  I’m not going to draw that just to keep this simple, but basically you’ve got the long flexor attaching out here and if you look at this, the more you pull in this direct, the more that tendon fires and pulls and pulls and pulls, the more it’s going to pull the toe in this direction and crank that hammer toe into a more and more deformed position. It’s pretty obvious.

But what you also have is, you have this short flexor and you want to pull down here if you’re trying to straighten the toe, right? So what you have is the short flexor attaches here and it starts and ends within the foot. But if you can pull down in this direction, that’s good, right? So this is good. If you can pull down there, this is bad because it’s cranking the toe into a more deformed position. So this one is actually the long flexor, is what some doctors will call it.

The brevis or the short one is this one. So the black one, that is the brevis and that is the one that’s actually correcting the position and fighting all the trouble here. So brevis is actually helping you and the longus is hurting you when you start to get a hammer toe after you rupture the planter play ligament. So the goal here, again, is to try to do something to reinforce the pole in the right direction, just like this rupture in the planter plate. You want to get that back together so it can actually heal.

If the doctor says, we’re going to do a tendon procedure, they’re talking about this one, they’re talking about working on the flexor digitorum longus, or the long flexor tendon that will actually change the direction and get rid of the deforming force and actually turn it into a corrective force. So the idea is really simple and I’ll show you another picture here.

If you look at it from the bottom of the foot where this is the big toe, this is the second toe, the other toes you don’t really care about so much here, but you got the metatarsal bone here and what we do is we actually take the tendon that’s going out to the end of the toe and we detach it. So we actually go in and we cut it and we actually remove it so that it’s not going to pull anymore from there.

We then actually take the tendon that’s here and we actually split it into a Y shape at this level. We then take the Y piece and we literally pull it up and attach it here on the top of the toe so you’ve now completely diverted it. So it no longer pulls this way and no longer pulls in that direction. Instead, what you have now is the tendon is up here and instead of pulling in the wrong direction, it’s now pulling straight down in the right direction to actually correct that deformity. So when you have this procedure, sometimes it’s referred to as a girdle stone procedure. Sometimes it’s just referred to as a tendon transfer. That’s also very common.

That’s mostly what you’ll hear is the doctor say, well, we’re going to do a tendon transfer procedure, and that’s what they’re talking about. So then every time you fire this long flexor tendon up there, it actually pulls the toe flat and straightens it. It actually really adds to the corrective power of the procedure of a repair of the planter plate, because you’re now actually doing something in addition to just sewing this up, you’re trying to correct the original deforming force that could have actually caused this thing in the first place. So that’s really the procedure.

It’s really taking this long tendon, detaching it, splitting it into a Y and then you take one side and pull it up on one side and you pull the other up on the other side, some doctors just stitch the two ends together on top of the toe. Some doctors put in a little interference screw. It doesn’t really matter how you do it. They just give you different ways of correcting it. But that’s really all it is.

We’re just taking one tendon that’s been pulling the toe at the end of the toe, making it crooked out here and we’re trying to make it pull in the same line as the short tendon was actually pulling it in the right direction in the first place. That’s really what the bottom line is when you’re having tendon surgery for a planter plate repair.

I hope this is helpful. If you find it helpful, please like it, share it, get it in front of your friends, send it to your mom, do something to actually get it with other people so that we can actually get more exposure and help more people that have these issues when they’re runners and they’re frustrated, they’re trying to figure out what to do and trying to figure out if their doctor is selling them a bunch of procedures that they need or not. Thanks for watching.