Today on the Doc On The Run podcast, we’re talking about something really simple, it’s the three best methods for diagnosing extensor tenosynovitis in runners.

What are the three best ways to diagnose extensor tenosynovitis in runners? Well, it’s pretty simple. They’re really three ways that I think are effective and they can work, all of them. It’s not necessarily true that one is better than another, but they all three can work.

The extensor tendons, like if you look at the back of your hand and you pull your fingers up, you see these lines; well, those are the extensor tendons. They pull your toes up and when you have the sheath that surrounds those tendons that get squished and irritated and inflamed, it hurts. It hurts a lot and I’ve had that myself. I got it during a Salt Lake City marathon where I tightened my shoe laces a little bit too tight, I was running downhill. It got very, very, very painful, and I could hardly walk for about three days after that marathon until I treated it and reduced the inflammation and got it to calm down.

Now, the good thing is it’s not like a partial rupture of your Achilles tendon or a metatarsal stress fracture where it could rip or tear or break or something, but it is very painful, and it really interferes with your training if you don’t treat it. But you got to make sure you’re treating the right thing. 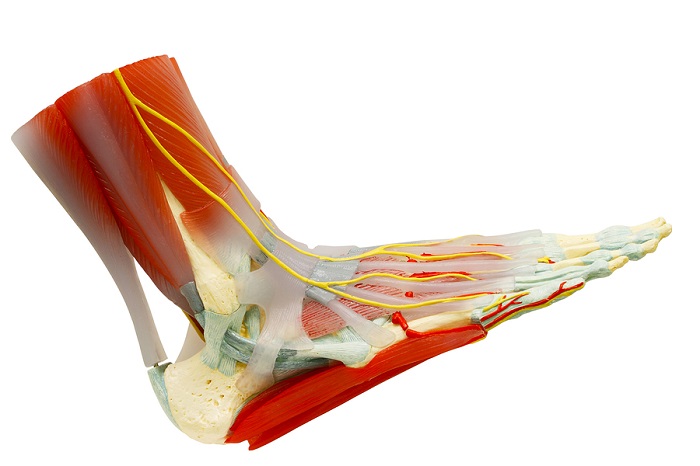 The way that you can diagnose this, first and foremost, the most common way probably is an MRI. So if you did a consultation, if you called me up and you were in California or Texas, and you wanted me to order an MRI so that you could look at it, well, we would do an MRI of your foot, and we would look for what we call a signal change, or bright white stuff, meaning fluid, in and around the tendon sheath in the top of the foot that pulls your toes up on the long extensor tendons. Typically it’s the extensor digitorum, longest tendon, but that’s not really important. The important thing is that you can see it on an MRI and if it’s something else you can tell now.

Extensor tenosynovitis is often misdiagnosed and it’s sometimes confused with a metatarsal stress fracture. So, if you get an MRI and your doctor’s confused about that, or frankly, if you’re just confused about it and you want an MRI to tell the difference; well, an MRI can be very effective because an MRI shows you inflammation in the bone obviously when you have a stress fracture, and it shows inflammation in the tendon sheath when you have extensor tenosynovitis. So, that’s one easy way to make the diagnosis, but it costs money and it takes time to get the MRI.

The second option is ultrasound. So if you’re in the doctor’s office, many times your doctor will actually have an ultrasound machine where they can do ultrasound imaging of the tendon sheath, and they look at it and they see a change in the signal that actually tells them that they have an inflammation in the tendon sheath instead of in the bone, and then you can make the diagnosis of extensor tenosynovitis. So your doctor might be able to do that right in the office, and that’s usually a pretty quick thing if they happen to have the equipment available and are competent at doing that procedure.

The other way is clinical exams. So, that’s the third way. Now, this is what I do the overwhelming majority of the time, and it’s really not that complicated. All you’re trying to do is isolate the structures on the top of the foot that could be causing pain and figure out which one is causing pain, and that’s what we call a clinical diagnosis.

So, we hear your story. If you told me you did something like I did, like you were nervous and you were over tightening your laces right before the gun went off and then eight miles into the marathon. Your foot starts hurting on the top of the foot and it gets worse and worse and worse throughout the race, and then it hurts like crazy when you push on the top of the extensor tendons, and it hurts like crazy when you move your toes and worst case, I’ve seen this three times, where you can actually hear the tendons squeaking through that inflamed irritated tendon sheath when it’s really swollen, that makes the diagnosis because then we know that’s what it is.

The other thing is that you’re obviously ruling out other things when you’re poking around on your foot. So, if you’re pushing on the extensor tendons and it causes pain, more likely to be extensor tendonitis. If you move off of the tendons and you’re pushing on the bone and that hurts, more likely to be a stress fracture. And if in that same area, you can see the intermediate dorsal cutaneus nerve on the top of the foot and you’re palpating that or moving your finger along it and that causes pain; then it’s more likely to be neuritis. But most podiatrists can make this diagnosis, and if you know what to do, you can do it yourself.

I actually walk patients through this all the time on webcam when they’re not really sure which of these things it is. So, we get on webcam and I show them what to do, I show them what to push on. I ask them a bunch of questions, same as one I just talked about with you, and then we make the diagnosis clinically just by poking around on your foot and hearing your story. But all three of those; MRI, ultrasound, and clinical exam are all simple and effective ways to make the diagnosis of extensor tenosynovitis when you’re a runner.

Again, what’s even more important than the diagnosis is the severity and what you’re going to do to maintain your running fitness if you want to get back to running. If you want to know how I go through that, when you book a webcam call or when I see you during a house call, you can check out the whole process. It’s at the 12 Steps web class. Just go to DocOnTheRun.com/12steps, and I will walk you through the 12 steps to rapid running injury recovery. I’ll see you in the training.

The only way to recovery from running injury quickly is to systematically apply what works, the same way you apply principles of training when you get ready for a marathon.

Most injured runners who call me for advice, and even some doctors, get these steps out of order.

These 12 steps, if applied in order, will help you recover, maintain your running specific fitness, and get back to running faster than ever.

This FREE web class will break it down for you: