#502 Is it okay to run before I get MRI of plantar plate sprain? - DOC

#502 Is it okay to run before I get MRI of plantar plate sprain?

Is it okay to run before I get an MRI of a plantar plate sprain? That’s a great question and that’s what we’re talking about today on Doc On The Run Podcast.

I often get questions from runners and this is actually a common one that I get from runners when they have either enrolled in the plantar plate sprain treatment course for runners, or if they’ve signed up to do an individual webcam consultation.

Everybody seems to think that an MRI will give you a crystal clear image of what’s going on inside your body and in some sense, that’s true. It is amazing, the amount of detail you can get when you get an MRI. However, you have to remember that the plantar plate ligament is a very small structure and when you get an MRI, it doesn’t necessarily show everything.

So I don’t put as much faith into MRIs of plantar plate injuries that you might hope for, but there are really some things to think about whether or not it’s actually okay for you to run before you get an MRI if that’s what your doctor’s trying to use to diagnose your plantar plate injury.

#1 Did your doctor say it was okay to run?

The first question that I think that you need to think about when really trying to figure out if it’s okay to run is number one, did your doctor say it was okay to run? Well, most of the people that ask me that question, I’m betting that didn’t even ask because they didn’t want to hear a no.

So most cases, doctors are going to say, you shouldn’t run because you could make the injury worse and that’s one reason that you would not want to run on it. If you ask your doctor, they’re probably going to tell you don’t run on it. 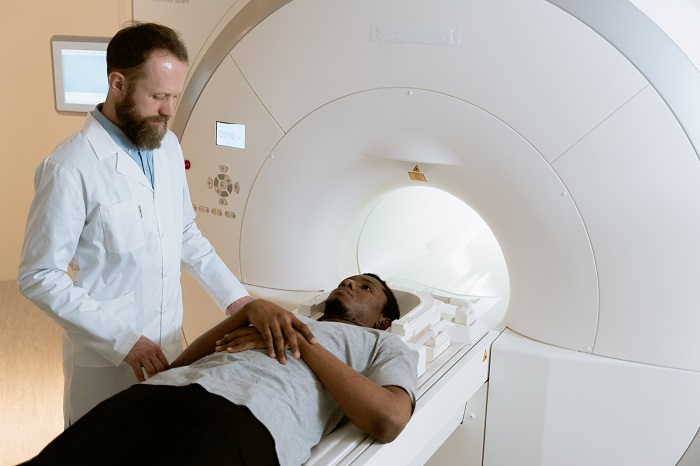 #2 Does it hurt more after you run?

If you run right before you get the MRI and you cause a lot of reactive inflammation to happen, it can make the signal change or the brightness of the MRI so intense that the radiologist can’t actually read it very well. It also makes it look way worse than it actually is because an MRI is a snapshot of the amount of inflammation in the tissues at that moment when you get the MRI. If you go run on it, you beat it up and you make it irritated and inflamed, then it can look way more inflamed than it really is.

When in doubt, ask your doctor, if you’re confused, get a second opinion from somebody that knows running injuries and feet, there are lots of people who can help you understand and make the right decisions, and one of those of course is your doctor. So if your doctor ordered the MRI, ask these question, is it okay to run and then ask yourself, is it hurting more after I run and then ask yourself, do I really want to get a clear diagnosis or not?

So think about that and then you can make the best decision about whether or not it’s okay for you to really run before you get an MRI of the plantar plate ligament.

Now, one thing I will say is that if you’ve been running on it for a long period of time and it doesn’t seem to get very inflamed, irritated or sore after you run, then, in that case, it may well be not such a big deal if you run on it and keep doing your running routine while you’re waiting to get an MRI because depending upon your insurance, it could take days or even weeks to actually get the MRI at study. And obviously, if it’s not hurting you that much, you really don’t want to lose all of your fitness just while you’re waiting to get the MRI. But think about these questions, think about what you really want and then you’ll make the best decision.