#466 Procedure vs Process in Healing Faster

Today on the Doc On The Run podcast we’re talking about procedure vs process in healing faster.

Procedure versus process. What’s really most important when you’re trying to heal a running injury? Well, that’s what we’re talking about today on the Doc On The Run podcast.

I said, “Look. A little over a couple of weeks ago, I was working on my motorcycle, and I cut my finger open.” I often do house calls on a motorcycle because I can get through traffic faster, I can park easier, all that kind of stuff. I used to race motorcycles. I like to work on them, but I made a mistake, and I ripped my finger wide open.

So I actually walked in the back door, and I’m bleeding all over the place, literally dripping blood on the floor. One of our kids gets all excited and he says, “Wow, what’d you do?” I said, “I cut my finger open.”

He’s said, “Do you have to have stitches?”

He got all excited because a while ago when I had a biopsy, I actually let him take the stitches out. He really likes medical stuff. He’s really interested. So he was all excited.

His mom, who is a physician as well, her eyes kind of went wide and she’s like, “You’re really going to let him sew up your finger?”

I said, “Sure. Why not? Let’s face it. We’ve all been to medical school. We know what the process is like. When you’re a resident, you teach medical students and residents who have never put in stitches to put in stitches. Yes, they have a white coat, but the truth is they have no more skill than somebody who’s in middle school.”

We basically walked him through this process. He injected my finger, made it numb, and then he actually sewed it up with suture. 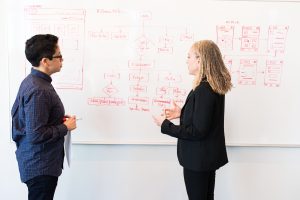 Now, we have two supervising physicians basically over this procedure so it’s completely reasonable. This is not something you should do at home. So if you think this is a good idea to let your kids sew it up, if you don’t know how to sew it up and you don’t have a couple of doctors showing them how to do it, terrible idea. That’s the thing. Anyway, so he basically starts sewing it up, and we were walking him through it. You have to do this. Don’t do that. No, you can’t do that. Some of them he had to redo, but it was no big deal. So he sewed it up, and then I actually put a bandage on it and protected it.

The procedure is a kid sewing up a finger. You would think that for you to get a good outcome with no scar, no visible scar, you might need somebody like a very experienced plastic surgeon. Well, not really. What you need to do is you need to put the skin together appropriately, and you need to protect it and allow the process of healing to take place without disruption. What I did was we put a bandage on it, I splinted it and I did not use it.

This is about three weeks later. You can see that the skin’s still peeling a little bit, if you can see that. There is a little bit of peeling going on around here because it was swollen, but there’s no scar. You can’t see a scar there. So when I took off the bandage and let him look at it after the stitches had been out for a few days, he was very surprised. I said, “Where’s the scar?” His mom looked at it and she’s like, “Wow, there’s no scar there.” I was like, “Well, that means that he is an awesome surgeon.” Well, what it means is that he put in the stitches correctly, and I didn’t screw it up in the process after putting in the stitches. I did not ride my motorcycle. I didn’t finish working on my motorcycle either by the way. I didn’t do anything. In fact, this morning when I was typing, I realized that I actually type now without moving that finger, because I got used to not using it, not moving it, not messing it up during that process.

So yes, the procedure is important. You need to put in the stitches correctly. The process afterward is also very important. So how does that apply to you as a runner? Well, the way that applies to you, as I was explaining during the second opinion call, is that if you had surgery to repair your Achilles tendon, if you had surgery to put a plate in, or if you were given a procedure like given a fractured walking boot, the process of actually protecting the piece of tissue to let it heal as quickly as possible is just as important as the treatment you received from the doctor. You have 100% control over that second piece.

So it’s really half and half. You have to have the right procedure. You have to be on the right path. But once you are on that right path, you need to give it 100% effort, and that is 100% within your control. So make sure that you take advantage of it, get the procedure done, make sure you have the correct procedure and then really respect that process, and you will get back to running as quickly as possible.