#442 Check your shoe when you have pain!

Today on the Doc On The Run Podcast, we’re talking about how you really need to check your shoes whenever you have pain from running.

This episode actually comes from a visit that I had with a runner where I was checking her foot because she had heel pain. This runner happens to also be a physician. So she assumed that she was having plantar fasciitis because she had some pain in her heel when she was running, and after run, she would noticed that she had a little bit of pain when she was walking around. So you’re not going to believe this story, but I have pictures to prove it and I will show them to you.

What happened is that she was running. She have been running on trails. She runs a lot and she started having this occasional weird twinge of pain here and there and then she got heel pain. So she asked me to look at her foot and see what I could figure out.

Well, I looked at her foot and I noticed right away that she didn’t have pain in the usual area where you have pain when you get plantar fasciitis, the sort of stuff we talk about runner’s heel pain course, but what she did have was these weird little spots on the bottom of her heel in the painful area that look kind of like she had some splinters or something stuck in the bottom of the foot. 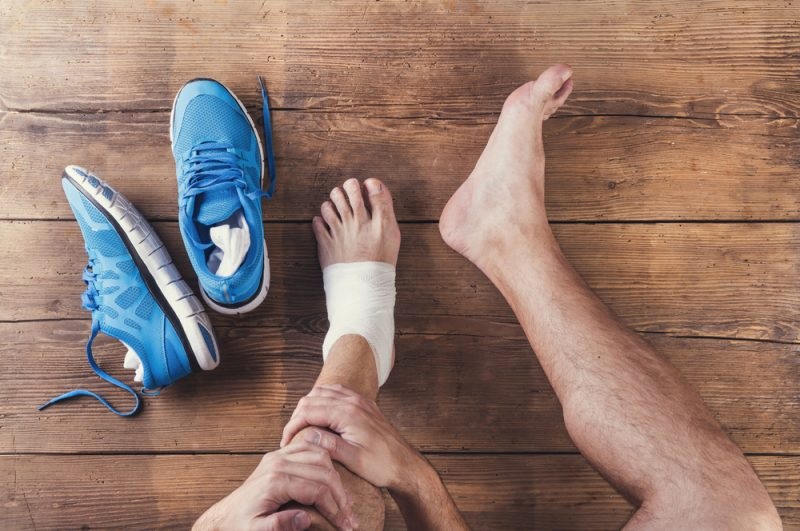 I did what I usually do. I took a scalpel. I started trimming down the skin, looking for retained foreign body, some splinter or little sliver of something stuck in the skin. I actually got out a couple of small fibers, but it was really weird. They seemed like synthetic fibers, kind of like fiberglass or something, they were little strands of material and I couldn’t really figure out exactly what it was. So then I did what I do next in most cases, I looked at her shoes.

When I looked at her running shoes, you’re not going to believe this, but I looked at the shoe insert and it looked like there was a small hole in the insert in exactly the same spot where she had this problem on her heel. Then I pulled the insert out and I could see that there was clearly on the foot bed inside the shoe, there was a little spot that indicated a hole through there.

It looked like something that actually poked a hole through there. Then it looked on the outsole of the shoe. There again, there’s a little hole, it’s kind of hard to tell there, but there is a little hole on the outsole of the shoe as well. So then I actually took my kit of stuff that I always bring and I took out a hemostat, and which is a little sort of metal clamp, kind of like sort of combination of tweezers and pliers. I took the long Guinea nose of the hemostat and I pushed it through the inside of the shoe.

What I pulled out was a pointed pyramid shaped rock that had actually worked its way all the way into the bottom of the shoe under the heel through the mid-sole foam and had gotten pounded upward and was protruding with the little peak of the rock sticking through the insert.

So when she was running down hill and landing on the heel, it was actually jamming into the bottom of the foot and it actually pushed some fibers of the shoe insert into the bottom of her foot. So it certainly explained why she was having pain. I mean, she had a rock that was literally poking her foot when she was running and jamming fibers of the shoe insert into the skin in the bottom of her foot. So after trimming all that stuff out and putting a pad on there to take some of the pressure off that area, she could walk around and run with no pain and it’ll certainly heal up with no issues at all.

But it just goes to show you, I mean, it seems like a silly thing when you hear the discussion, but the fact is this is somebody who’s a physician who’s a long time runner who should have known that it’s not plantar fasciitis. But her story, the way that she had pain actually seemed kind of like plantar fasciitis. But in fact, it was a problem with the shoe itself. So hopefully you won’t get any pointy rocks sticking in the bottom of your shoe, but don’t think it can’t happen. It certainly can.

Anyway, that’s the story. So always check your shoes, look for the shoes for retained foreign bodies, look for holes, look for stuff poking through them. It can happen even to you.