#379 Which is better: soft or hard trail running shoes? - DOC

#379 Which is better: soft or hard trail running shoes? 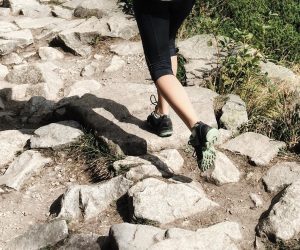 Today on the Doc On The Run Podcast, we’re talking about which is better: soft or hard trail running shoes.

If you’re thinking about getting some new trail running shoes because it’s that time of year and you’re ready to get outside and start running, you have to really think about what’s going to be best for you. And someone asked me the other day, “Which is better, soft or hard trail running shoes?”

The fact is, it’s not really that simple. There is no “better”…it’s just which is better for you, depending upon what you want to do. In thinking about this and trying to explain it during a telemedicine visit to a runner, I figured out that basically there are really three critical factors for deciding if your trail running shoes are too hard or too soft for you with the stuff you plan to do, so I thought it might be useful to talk about those things.

The first thing to think about is you specifically. What is it that you need to think about when you get any kind of running shoe at all and that’s your foot type? There’s a whole range of foot types and everything is relative. Some people have really high arches, some people have really low arches and in short, the higher your arch, the more stable your foot and the more cushioning you need to protect you because your foot lands in way that’s more rigid and potentially delivers more shock to your system because your foot is so rigid, because of this high arched foot type.

If you have a low arch foot type, that means your foot’s relatively unstable and it absorbs impact easier and better than somebody with high arches but that also means that you need a little bit more stability built into the shoe to compensate. If you have low arches and you have really soft running shoes, you’re really going to be putting yourself at risk of over-training injuries because you’re going to be putting too much stress on things like the posterior tibial tendon and the plantar fascia and some other structures that help stabilize your foot. 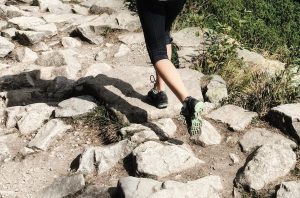 But then other times of the year, once they start to get sandy and the soil starts to break up, if there are lots of mountain bikers and stuff on those trails, then they can be pretty slippery and kind of soft because they give underneath you. Are there are lots of leaves and grass and soft materials on your trails? But you have to think about the trail surface itself. If you’re running on a really soft, muddy trail and you have really soft running shoes, then you basically have too much cushioning. At the same time, if you run on a trail that is really rocky and it’s too soft, then that can be a problem as well, depending upon the third factor and that is the steepness of the trail.

I’ve been recently running in some Brooks Cascadia’s that are pretty soft and cushy. I have pretty high arches and I actually liked them but the most recent Cascadia’s, at least the ones I’m running in right now, are really soft compared to the previous versions. What’s interesting is that when I put them on and I run on flat ground where it’s really hard packed, hard trail or rock, they feel really good. When I run on just a little bit of soft, muddy stuff, it feels okay.

But when I go and I do really steep descents where it’s very rocky and really, really hard, they are way too soft and I can actually feel the thing just collapse underneath me. It feels like a marshmallow that just crushes all the way to the bottom. I know that when I’m running on really hard packed descents it’s too soft and it’s not enough cushion. It’s actually, in that case, ones that feel a little more rigid when I tried them on in the store would actually be better for those really rigid hard surfaces when it’s a steep descent.

At the same time, you have to really think about going uphill. If you’re running uphill and you have an unstable flatfoot type, you have really low arches and you have an unstable shoe, when you’re going uphill, if it’s soft and cushy, you’re going to have way too much flexibility in your foot and you’re basically running uphill with your foot, trying to push off against that soft surface and that’s too much, so you need more stability then.