Today on the Doc On The Run Podcast we’re talking about why the first days of running on a healed injury are so risky.

Today we’re talking about why it is that it’s so risky to go for a run right after you’ve healed a running injury. Obviously, nobody wants to get a running injury. And the only thing worse than a running injury is a re-injury because most of the people who call me who get a re-injury have gone through a truly horrible cycle, they get a stress fracture or a plantar plate sprain or Achilles tendon injury or some minor injury that really didn’t need to take them out.

They spent a bunch of times sitting around in a fracture walking boot waiting to heal, waiting to get better, not running, losing their fitness, knowing that they’re losing their fitness. And then they’re told that it’s healed. They get the green light. The doctor tells them it’s okay to run. The doctor tells them to go out and just let pain be your guide. And then they get injured again.

And that’s really demoralizing because if you’ve spent four weeks in a boot or six weeks of not running or three months of doing nothing, it’s really disheartening when you go and do your very first run or your second run or just a couple of runs in and you feel that pain again. And most of the time, I think this is completely unnecessary. It’s really unnecessary for a couple of reasons.

Now you can also do some really simple things to make sure that you don’t get de-conditioned and lose all of your fitness that actually puts you at a higher risk of reinjury. And what I mean by that? Well, we know for a fact that if you look at all the research on running injuries, there are really only three things that put you at risk of another injury later.

The first thing is being male, so we know men are dumber than women. The second thing is a high mileage runner. So if you run lots and lots of miles, it just stands to reason that you’re going to be more likely to get injured. And the other one is our history of prior injury.
If you’ve been injured before, you’re likely to get injured again, and it’s not because you’re broken, it’s not because you’re defective. It’s because you have gotten damaged from the process of sitting still. If you’re sitting still, you get weaker, you get stiffer, you lose all your neuromuscular connections, your appropriate reception or your ability to tell where your foot is underneath you gets damaged and lost. And then your form’s terrible. 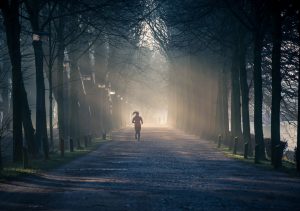 So when you run with bad running form and you’re weak and you’re unstable, your balance is off, you wobble more, your load structures at higher peak forces. That is what puts you at risk of reinjury and what you’ve got to really guard against if you’ve got a running injury.

Now one of the things I’ve created that can really help is a program called how to fast track your running injury in record time. It’s really simple. It’s a three-day series of training sessions that are all less than an hour, where I actually walk you through the process that I use myself that teaches you what to do that make sense. And where this came from is that the first part of it is that I teach you what I learned about in medical school when I got a stress fracture that was wrong with the normal treatment.

And then I show you what I learned that was right when I was actually training for an Ironman race and got an injury. I also show you what I did in that five-step process that I used that actually allowed me to continue to race and actually do that Ironman race and get my fastest Ironman time ever. So, that’s what I teach you in this three-day process. So it’s called how to fast track your running injury in record time.

It’s a three-day training series. It’s FREE, no cost at all, but I promise if you go through that training, it will help you understand what you can do right now to actually fast track your running injury and make sure that you’re not falling into that trap where you’re just sitting around unnecessarily waiting too long to get back to running. So go check it out.

Grab your seat now while it’s still free!  Just can click on the link below and you can join it there. It will help you make sure that you don’t fall into that trap and that you don’t suffer some unnecessary risk when you get back to running.