#214 Will I run again after broken metatarsal surgery - DOC

#214 Will I run again after broken metatarsal surgery

Today on the Doc on the Run podcast, we’re talking about whether or not you’re going to be able to run again after broken metatarsal surgery.

Will I run again after a broken metatarsal surgery?

Well, this is a great question if you’re a runner and you get a Jones fracture or you ignore a stress fracture and you run to the point that it actually breaks and moves out of position and becomes a displaced fracture, your doctor may tell you that you need to have surgery to put the bone back into position, put a little plate and some screws on it to hold it together and to help it heal a lot faster. 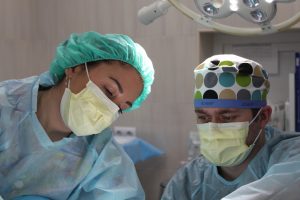 But you really need to think about this carefully because obviously if you’re a runner, if you get an injury and have surgery, you’re not having surgery just to make your foot look better on an X-ray. You’re having surgery to repair the bone to get to the point that you actually can get back to running.

So there are a couple of key questions I think you really need to think about when you have a broken metatarsal and a doctor tells you have to have surgery. The first question you need to really think about is, will you be stronger or weaker after surgery? This is something you can control. You can decide right now before your surgery whether or not you’re going to put in the work to maintain your fitness, maintain your strength, maintain your coordination, your neuromuscular connections, all of the things that will actually help you recover faster and get back to running sooner once the surgery has completely healed.

You’re only talking about operating on one bone. It’s not your whole body. You’re not going to be in a body cast. You’re just going to have to take some pressure off your foot for a while. That doesn’t mean that you have to get weaker. You could get weaker and you will certainly get weaker if you just sit still and do nothing during the recovery process or even the period of days or weeks leading up to your actual surgery.

You have to really think about this. You have to control every variable you can, and whether you maintain your fitness or you let all of your fitness and strength wither away, that’s entirely up to you. So make a decision about whether or not you’re going to be stronger or weaker, and then come up with a plan to get stronger and maintain your fitness so you are better able to get back to running once the bone is healed.

And that brings up next question. Will the bone be stronger or weaker after the surgery? Well, the goal of course is to make the bone more stable and in theory, stronger. So when you break the bone, it’s got a crack in it. It’s in two pieces. If we put a plate on the bone and we attach some screws to the plate and the bone, then it creates a stable construct. It is stronger obviously once we put a plate on it than it was before it was broken. But the screws make tiny little holes through the bone. But really, I think even when the bone heals, even though you have those little holes going through the bone where the screws go through the bone to hold it together, it’s still pretty strong because you have a metal plate reinforcing that.

But of course, if you take the plate off, if you have a big screw that’s put on the inside of the bone or you have pins through the bone that are removed later, well, those leave little holes that can become stress risers or weak points where the bone can actually be more prone to breaking later.

So if you have hardware like screws or plates or pins that are put in the bone and they’re left in the bone, then in many cases, that’s not really going to make the bone weaker. It’ll probably make it stronger because it’s an added thing to add stability to the bone.

But if that hardware comes out later because it’s irritating or the doctor has put in some kind of hardware that just has to be removed later, then when you take out the pins and the screws and you have little holes in the bones, it can be weaker until those fill in and that can take months for that to happen. If that’s the case, then you have to really be careful and protect the bone while it strengthens after that surgery.

But when it comes to the question of whether or not you can really run, you have to really think about this. Think about what really caused the fracture. If running caused your fracture, made it break and broke it into pieces, then yeah, you probably have to stop running. But I don’t really believe that is the case for most runners.

Running is not the problem. Stress, strain, pressure, excessive force on the bone, those are the problems. So if you have a metatarsal that you actually do run until you break it and then you want to get back to running, you have to really think about what can you do to reduce the stress and strain and pressure and excessive force on the bone so that it doesn’t break again.

That is really the million dollar question. And if you can figure that out, then yes, you can run again after you have broken metatarsal surgery.