#212 What is a displaced vs non displaced fracture?  - DOC

#212 What is a displaced vs non displaced fracture? 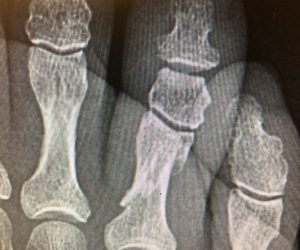 Today on the Doc On The Run podcast, we’re talking about the difference between a displaced vs non-displaced fracture, and what it means if you are a runner.

If you’re a runner and you walk through your living room and you accidentally kick the coffee table or you catch your toe on a bedpost or you’re running down a trail and you trip and fall and you break something in your foot, whether it’s a toe or a metatarsal or anything else, when you have a broken bone the doctor may look at it and tell you that you have a fracture. But specifically, doctors classify fractures in a couple of ways, and one of the ways that we classify them is we say that a fracture, or the crack in the bone, is either displaced or non-displaced.

A runner recently asked me what that really means and why it’s important, and I think that you should just understand this brief little description and explanation of why it’s really important to classify a fracture as either displaced or non-displaced.

So, displaced means that when you crack the bone, obviously, if there’s a crack it divides the bone into two separate pieces. If the bone is moved out of place, then we say it’s displaced. And so, displaced just means the bone is out of position and when you look at the X-ray, the bone is tilted in some way or moved apart so that you can really easily see that crack in the bone. So why is that important? Well, when you get a fracture, you get bleeding in that space between the two pieces of bone, that turns into a blood clot and then the blood clot turns into what we call soft callous.

If the space is too big, if the bone is too far apart, if the fracture is too displaced, then you have a problem. It may not heal and that is a serious problem, because in general the further away the bone is, the longer it’s actually going to take for it to heal. 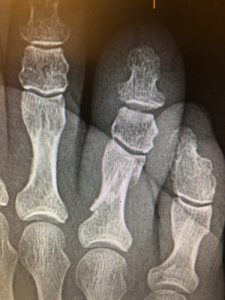 So if you’re a runner, and you want to get back to running, then obviously, the best thing is you have a non-displaced fracture. But if you’ve broken a toe really badly, or you drop something on your foot, and you really cracked a metatarsal bone and then you ran on it and moved it out of place, and it’s actually displaced, it’s going to be harder for it to heal.

So that’s the main thing, is just refers to positioning and how big the crack is on the bone. And so, when we look at the X-ray, and we are trying to evaluate it, we want to know whether or not the bone is actually going to have a high likelihood of healing or not.

In the foot, basically, we think of anything as less than two millimeters of displacement is tolerable. So if it’s only a millimeter or you can see the crack, but you can’t really measure a gap between the two edges of the bone, then it’s sort of minimally displaced, or non-displaced. And all that means is it’s like barely displaced. You can see a crack, but it’s really not moved out of position. And when it’s minimally displaced, when it’s non-displaced, we don’t really worry about that much whether or not it’s going to heal.

But when it’s displaced and it’s moved apart three, four, five, 10 millimeters, a long way away, in general, that’s not a good thing. That means we either have to look at it under X-ray and put the bone back into position, or we have to take you to the operating room, put the bone back in position, put a plate, screws, pins, some kind of hardware in there that will actually compress the fracture and basically turn it into a non-displaced fracture by putting the bone back where it belongs and then it will start to heal.

So that’s the difference between a displaced and a non-displaced fracture.