#194 Does a Jones fracture need surgery?

Today on the Doc On The Run podcast, we’re talking about whether or not a Jones fracture needs surgery when you’re a runner.

Today on the Doc On The Run podcast, we’re talking about whether or not a Jones fracture needs surgery when you’re a runner.

A few days ago, I got an email from a patient, and he wanted to know whether or not he should have surgery to fix his Jones fracture. Well, the first thing you have to know about this is that you should only have surgery if you believe that is the only way you’re going to heal appropriately.

I think that in medicine, we have this idea that we can fix anything and that if you can do something that’s painful or expensive, it’ll probably make you heal faster. Some cases, that’s true, and some cases, it’s not true, but when you’re a runner, you really have to think about it very carefully because when you have surgery, your healing actually doesn’t begin until after you’re done with surgery. The healing process is always taking place, and you don’t get any credit for anything that happens before the time you have surgery. What do I mean by that? 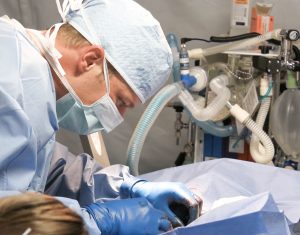 Well, when you have an injury, and let’s say you’re running, you hurt your foot, you get a stress fracture, or you slip and fall or something, and you wind up with a crack in the fifth metatarsal bone that we call a Jones fracture, it becomes worrisome because we think it’s not going to heal. The first thing you have to understand though is that if you have the injury and it takes you a couple of weeks to get to surgery, you have to see the doctor, you have to plan the surgery, you have to get on the schedule for surgery, and this isn’t really an emergency, so you’re probably not going to get on the surgery schedule that day, it’s probably going to be more like a couple of weeks.

Well, if you can do some other stuff and get it to start healing quicker, then you could speed up the overall healing process. When we’re trained surgically, I did a three-year surgical residency, and we’re taught about all these different parameters and rules we try to use to decide whether someone needs surgery or not. Well, with a Jones fracture that I think most doctors would agree with is that you can usually get a Jones fracture to heal, well, most of the time, at least half the time if you use a cast and you don’t walk on it. You use crutches.

Now, if you do that, if you do a cast and you do crutches for eight weeks, and it doesn’t heal, then many doctors will then recommend that you have surgery to put in a screw, a plate, or something to stabilize the fracture, hold it still, compress it, and hopefully get it to heal faster. Obviously, if you try nonsurgical treatment for a couple of months and that doesn’t work, and then you have to have surgery, and then you’re back on crutches and in a cast for another few weeks, that would be a disaster because no runner can afford to take that amount of time off of work.

You have to see why it is that, if you talk to your doctor, why is it that not all runners heal during that first period of nonsurgical treatment, like what are you doing wrong. Those studies that we refer to aren’t about runners. They’re about normal patients. They’re about patients that may smoke. They may have unhealthy eating habits. They may not be as healthy as you, the runner. You’re probably more likely to heal quickly when you’re an athlete than when you’re a non-athlete.

When doctors give you statistics about what it takes to heal a certain injury, you have to take that with a grain of salt and realize that you, as a runner, are likely healthier and will likely heal faster than the normal patient. That’s something you have to really talk about with your doctor when you’re considering surgery. Keep in mind, your doctor gets paid a lot to do surgery, so although no doctor is going to, I don’t think he’s going to take you to the operating room just so they can get paid, they’re trying to do whatever’s best for you, but you have to also remind them that you are healthy, you are an athlete, you are going to follow directions, you are going to do anything you can to help it speed up and heal faster. Then you want to get the doctor on board with that idea and try to help you figure out to do that.

The reason I tell you that is that if you get what is called a Jones fracture, you should always get a second opinion to make sure that you actually do have a Jones fracture and that surgery might even be something that’s even a possibility for you. If you do all those things though, if you really pay attention to what’s going on, you listen to the doctor, you explain to the doctor why you think you’re going to heal faster and that you’re willing to do everything you can to heal faster, then you should be able to get back to running a whole lot sooner.