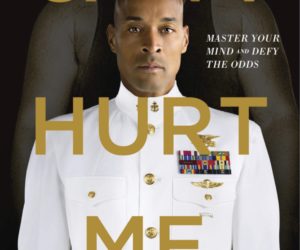 Today on the Doc on the Run podcast, we’re talking about the number one book every runner should read in 2019.

I may be going out on a limb here, but I’m going to recommend the number one book for 2019 if you’re a runner. And I think this is really true. I think this is going to be the best book for runners for 2019. And truthfully, it’s not actually just a running book. The book is actually David Goggins’, “Can’t Hurt Me.”

So, this guy, David Goggins, I actually met him about 10 years ago or so. And he probably won’t remember me because I’m just a run-of-the-mill runner. But I met him at this event. It was a small event. It was a race in Chattanooga, Tennessee called the Wauhatchie Trail Race. Since that time, David Goggins has gone on to do some pretty amazing things! But, the truth is, what most people don’t know is he did lots of amazing things before that…And that is what this book is all about.

There was actually a firestorm on Twitter recently when people were saying I was irresponsible talking about how people could run with stress fractures. Well, Goggins did it. But his book isn’t about running with stress fractures. This guy is a real life hero and he’s written an amazing book that everybody should read.

So, I think “Can’t Hurt Me” is going to be unbelievably motivational for you. You have to read it in 2019 because David Goggins is unbelievable and his story is incredible. If you have one of those days where you’re thinking, “Well, I shouldn’t go for a run today just because it’s rainy or it’s cold outside,” trust me, reading this book is going to help with that.

If you want to achieve big things this year, read this book. Get it from Amazon. Get it wherever you get books. Get it direct from any website where you can get it, but get this book. You’ve gotta read, “Can’t Hurt Me.”

I am telling you, “Can’t Hurt Me” is awesome. Get his book, get his audio book alos, and then you can thank me later. He’s gonna motivate you, he’s gonna keep you going and then when you have one of those days where you’re super worried about some injury, maybe you’re gonna worry a little bit less. I am not telling you to ignore your injuries, however, this guy will prove to you that you can do big things whether your foot hurts or not.

So, get this book. You’ve gotta read it. You’ve gotta follow David Goggins. You’ve gotta keep up with him. This guy is the real deal. And not every runner knows who he is, but I’m telling you, he’s worth following. So, get his book and enjoy it and then get on with a great year.